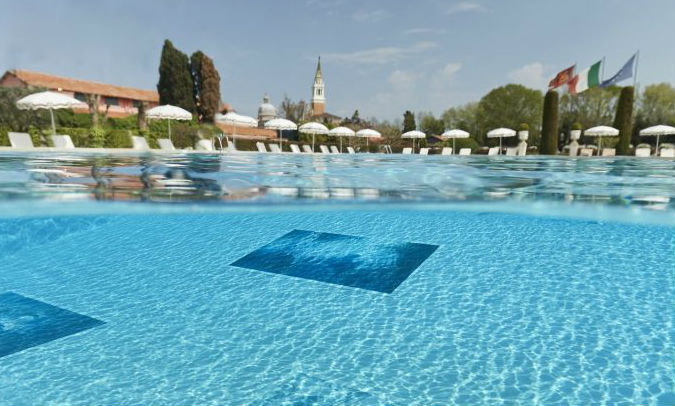 Where to stay in Venice for the Biennale?

After  you have trekked through the Giardini and the Arsenale taking in the best of modern art in the world, you need some quiet “me” time.

Time to retreat to the best base in La Serenissima – the Belmond Cipriani on Giudecca.

But just because you have left the bustle of the formal Biennale and San Marco in your wake as you cross the Bacino to the Cipriani, you don’t have to leave the art behind.

Works by artist Marco Rizzo will be included in a special installation in the Cipriani pool – a rare luxury in a city surrounded by water but with few hotels boasting their own piscina!

Throughout the year, the hotel’s Olympic-size swimming pool will play host to various works from the artist well-known for his surreal monochrome photographs, depicting haunting scenes of Venice underwater.

Hotel guests will be provided with goggles so they can dive beneath the water and admire the works up close.

While you’re down there….

Thinking about all that new stuff makes the soul long for the old.

The Galleria dell’Academia (Campo della Carita, 1050, 30123 http://www.gallerieaccademia.org/the-museum/?lang=en) has a focus on the Venetian Masters. Here you will find Bassano, Bosch, Canaletto, Lotto, Bellini, Tintoretto, Veronese, Titian.  Beginning 10 May 2017, Gallerie dell’Accademia di Venezia is presenting the work of the pre-eminent American painter Philip Guston (1913 – 1980) in a major exhibition exploring the artist’s oeuvre in relation to critical literary interpretation, Philip Guston and The Poets.

The Palazzo Ducale (or Doge’s Palace) is the grandest of all residences in Venice. Originally home to the city rulers, the building exemplifies the Venetian Late Byzantine Neo-Gothic style of architecture. Taking up a whole corner of the Piazza San Marco, the building was opened as a museum in 1923 and is today Venice’s most visited attraction. With frescos by Titian, Veronese and Tintoretto and sculptures by Sansovino, combined with the stunning architecture and furnishings, the building highlights Venice’s historical power and wealth. During the Biennial, the Palazzo Ducale is hosting an exhibition of paintings by Hieronymus Bosch, the 15th century Netherlandish painter known for his fantastically weird images of religious scenes. Obscure half man half beast creatures revel in depictions of hell on earth in macabre and disturbing visions. The exhibition which is open until June 4 and was first shown at the Prado in Madrid celebrates the 500th anniversary of the artist’s death and centres around three recently restored works that have been housed in the Academia in Venice, which have been returned to their former glory. A scholarly important show, it is the first time so many of Bosch’s works have been shown side by side and is cleverly curated with artefacts from the artist’s world that enigmatically elucidate how the artist came to paint with such religious imagination.

The Museo Correr just across Piazza San Marco from the Doge’s Palace covers the art and history of the city through various works of art, sculptures, fabrics, books, furniture and ethnographic objects. Housed in lavish 17th century state apartments, the museum is a welcome break from the crowds of some of the more popular museums in the city, but not deservedly so. It contains stunning works of art by the city’s resident artists including sculptures by Antonio Canova – one of the best sculptors to ever live. The museum takes it in turn with the Doge’s Palace to host exhibtions, so while Bosch is on across the road, the Museo Correr is taking a break. They haven’t announced their next show that will coincide with the middle of the Biennale yet, but previous exhibitions have re-examined the life and works of Renaissance masters such as Caffi and Bellini, through to contemporary American Conceptual artist Jenny Holzer. Every show has been well received by the public and critics so there is little doubt this summer’s show won’t disappoint, whatever it is.
http://www.ristorantelocal.com/

nspired by the ongoing changing of the seasons, Local is a creative and natural take on the Venetian traditional cuisine. Local in Venetian means “Place where you can eat, drink and be merry”. It also express the powerful connection to Venice and the Venetian lagoon that is at the heart of our restaurant.

Our ever-changing menus capture the true essence of an incredible ecosystem which is made of water and earth. We look for the finest organic ingredients, carefully sourced from small local producers, trusted growers and fishermen, who love nature and its natural cycle only as much as we do. These exceptional ingredients are combined with simplicity, in order to enhance their flavour and characteristics.

Our concept is also translated into our wine selection. We handpick only artisanal natural wines, and along with the wines we select the fantastic women and men that produce them according to the natural seasonal cycle and respecting traditional methods. The result is a wine that is a pure expression of the terroir where it comes from.

Finally, we have used local artisans also for the interiors of our restaurant. From the floor, the tables, the chairs and the lamps, to the glasses and the wine cellar… everything is handmade by local craftsmen. You will also be able to enjoy our chefs at work in the open plan kitchen whilst they are preparing signature dishes and cicchetti.

We look forward to welcoming you soon,

Benedetta and Luca Fullin
Caffe Florian is the oldest (and probably most famous) café in Europe. It tells an interesting narrative of Venice’s history of trade from which the city grew rich, along with its love for opulence and self-indulgence. Situated on the east side of the Piazza San Marco, the interior of the building oozes history, with hand-painted frescos by Cadorin and Casa, waiters in white dinner jackets, and a list of celebrity clientele that includes Casanova, Hemingway, Chaplin, Goldoni and Dickens. The interior tables are hinged to accompany the grandest of outfits squeezing in. In the springtime, the tables spill in to the Piazza where you can sip your coffee (or spritz) in the same manner artists have since 1720. Don’t leave without inspecting the paintings or trying the macaroons.
https://www.caffeflorian.com/en/