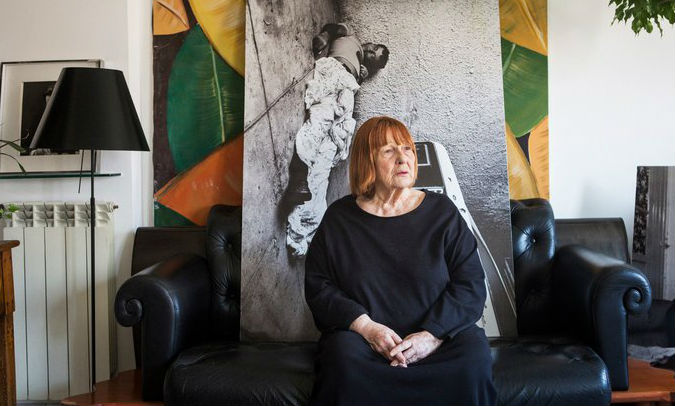 They are by turns gruesome, haunting, tragic and, often, astonishingly poetic. As a collective, the photographs offer an unflinching pictorial tapestry of recent Sicilian history — its people, its poverty, its folklore and, above all, its decades-long forced dalliance with the Mafia, or Cosa Nostra. What may have been lost in the gradual transition of these black and white images from the front pages of Palermo’s L’Ora to a host of museums is that they were shot by Letizia Battaglia, a Sicilian woman — remarkable in itself — during one of the bloodiest crime sprees in Italy’s recent history.

Their power lies in their immediacy. As Mafia rivals waged a cruel and pitiless campaign for control of the island beginning in the late 1970s, Ms. Battaglia was unflinchingly present, unwilling to look away.

“Sometimes I look at my photos and say, ‘I was in there.’ Three people murdered. I look at them and think, ‘What a horror, three people murdered,’” Ms Battaglia said on a recent morning in her downtown Palermo apartment. There, large-format prints of several photographs — including one of a triple homicide — leaned haphazardly against a couch, waiting to be shipped to yet another exhibit. “I can’t accept that anymore,” she said, genuine sorrow in her voice.

In years when the word Mafia was barely whispered in public, Ms. Battaglia, now 82, was chronicling its brutal activities for all to witness. In 1979, she boldly set up oversize photographs of Mafia victims in the main square of Corleone, the domain of Sicily’s most notorious and ruthless Mafia clan. She was aware of the potential consequences.

“I did exhibits against the Mafia, in Palermo, on the streets, in Corleone. I was afraid,” she conceded. “There, I said it, I was afraid. It was true.”

But fear did not stop her. Nor did the threats she received by phone. The spits that followed when she walked on the streets, the smashed cameras. Once, she received an anonymous typewritten letter advising her to leave Palermo forever, “because your sentence has already been decreed.”

“At the time, I was offered a security detail but I refused it because I would have lost my freedom,” she said. “It was too important. I felt the duty to continue, the duty not to be afraid.”

“It turned out all right in the end because they didn’t kill me,” she said matter-of-factly.,,,

Full story in The New York Times, Portraying the Mafia

Main image: Letizia Battaglia, 82, at her apartment in Palermo, Italy. Her pictures of the Mafia’s cruel campaign for control are valued as historical points of reference and as deeply moving slices of Sicilian life. Credit Gianni Cipriano for The New York Times