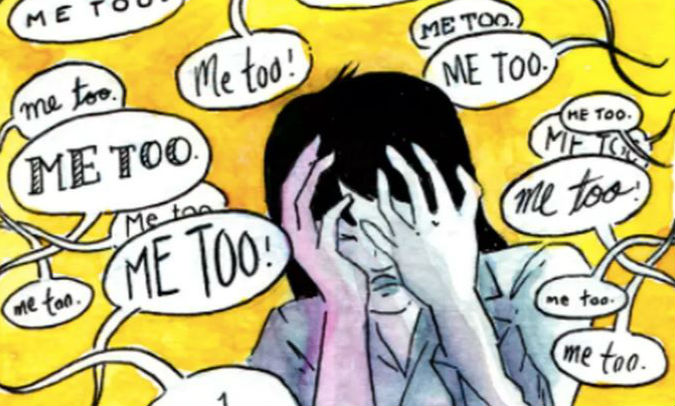 Since Harvey Weinstein has  been revealed as a allegedly serial groper/rapist/sexual terrorist/abuser, the stories of women in in the work place being harassed have poured out on Facebook. Many describe incidents of harassment, some rape. But between harassment and rape lies a chasm, writes Christine Hogan. There has been a confusion about sexual harassment in the workplace — which most of those who chimed in on #metoo outlined — and sex crimes outside the work environment.

The first is something which you can do something about.  Harassment is defined by the Human Rights Commission as:

Sex crimes are a whole different question. And the first should not be conflated with the second. Mediation and counselling can generally stop, if not cure, the office harasser. Dismissal will move him on to another field.

Rapists might also benefit from counselling, but nothing seems to have made a difference to Jill Meagher’s rapist/murderer. Jill Meagher was a 29-year-old Irish woman living in Australia who was raped and murdered while walking home from a pub in Brunswick, in Melbourne, in the early hours of  September 22, 2012.

Jill’s case was initially classified that of a missing person, as she had failed to return home. Her body was discovered six days later near Gisborne South, about 50 kilometres (31 miles) north of Brunswick.

Adrian Bayley pleaded guilty to Meagher’s rape and murder in April 2013.  Sentenced to life imprisonment, he will be eligible for parole in 2055. At the time of Jill Meagher’s murder, Bayley was on parole for a series of sexual offences.

On Facebook this morning, I read a post from a young woman saying how sick she was, constantly having to defend herself from rape.

Well, yes. Just as people are sick of having to defend themselves from being murdered, robbed, kidnapped, pickpocketed, scammed, duped, sucker punched, and bashed.

There will always be opportunistic predators in the world, and most of us take precautions to ensure that we are not preyed upon. Houses are locked,  as are cars. Windows and doors are barred. Precious possessions are put in home safes. Children are warned constantly about stranger danger.

And still, houses are burgled. Precious items are boosted. Children are kidnapped and murdered. Women are raped.

Sick of having to stop yourself from being raped? Indeed, women are.

But we are now more vulnerable thanks to a message from society – girls can do anything – and advice from our mothers about not putting ourselves at risk.

I thought that, one night when a radio personality picked me up for our first date, dinner in well-known restaurant. When he diverted from the usual route, I asked where we were going. “I thought it would be nicer if I cooked you dinner at my place,” he said.

I was a little taken aback, not knowing this guy very well, but I thought I should be cool about the whole thing and I was soon ushered into his waterfront apartment. My qualms started to settle. He cooked dinner, poured the wine, and at the end of it, we went to the sofa to continue our conversation.

Within seconds, he was trying to pull me off the sofa, with me firmly resisting with one foot on the floor and the other braced on the coffee table. And then. overcome by the Pepe le Pew implications of what was happening, I started to laugh — and kept laughing as I asked him to call me a cab.

For some reason, he drove me back to the office, where my car was parked. As I got out, looking far more confident than I felt, he farewelled me with:  “I am going to ruin you, professionally and personally.” With that, he drove off, and I ran inside shaking, aware there could have been a very different outcome other than a blowhard with a pricked ego making an idle threat and an important lesson for me.

I never told my mother. She had been telling me for years not to trust people I didn’t know. But the girls can do anything message had been stronger that night.

Now it isn’t — women cannot do anything. Strategies have to be adopted to prevent assault.

Tired of defending yourself against rape? That’s too bad… It’s the never-ending story for women and girls. Has been since the dawn of time…