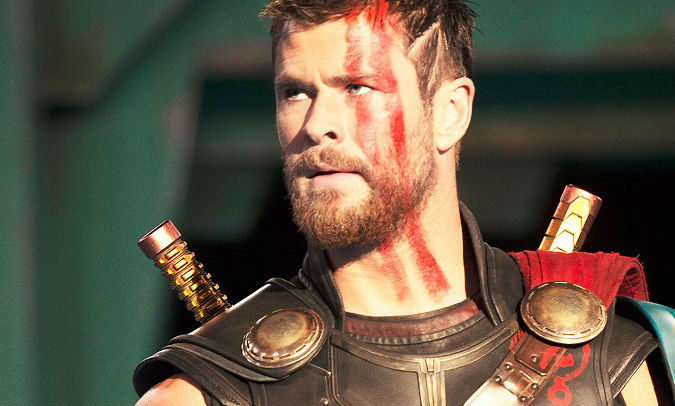 Ah, Chris Hemsworth. What a talent. What total piece of eye candy as Thor.  Ooops, sorry I’ll stop now. Here is an excellent review of this must-see film which also serves up Cate Blanchett and Tom Hiddleston. And poor Mark Ruffalo as the Hulk. Returning home to Asgard after battling demons in some dimension or other, Thor discovers things aren’t quite as he left them. His apparently dead brother is in charge, having packed dad Odin off to a retirement home on planet Earth. While rescuing him, they’re interrupted by long-lost (and wholly forgotten) Asgardian Hela, AKA the Goddess of Death. She has appropriately wicked plans to avenge herself on her hometown.

Things don’t really get any simpler from that point on. It hardly need be said the plot is never really the point in a comic book movie. This one, directed by Taika Waititi, rattles through detours and diversions and reversals like the most breakneck of sideshow rides – and is about as garishly lit. Like the best rollercoasters, it’s also ridiculous, dizzying fun.

While it’s still more of a Marvel film than a Waititi movie, the New Zealand director’s fingerprints are all over Thor: Ragnarok. For one thing, it’s the first out-and-out-comedy in the franchise.

While Ant Man and (to a greater extent) Guardians of the Galaxy flirted with laughs, Ragnarok is in a committed relationship. From the opening scene, in which Thor explains his predicament to his cellmate (a long-dead skeleton), it’s clear there has been little attempt to reel in the director’s irreverent wit.

This shift in tone suits Chris Hemsworth, whose Thor – with his penchant for portentous, cod-Shakespearean dialogue – has always had the potential to slip into bland, generic hero mode. Here, Thor is more self-aware, talking about himself in the third person, never doubting that he is the hero of the movie and resolute about living up to the responsibilities that come with being a star. For the first time, Hemsworth gets to outshine Tom Hiddleston’s wicked Loki in the comic moments.

Indeed, Waititi gives Hemsworth a series of winning double acts in which he shifts between straight man and funny man. His rapport (or lack of) with the Hulk and his alter-ego (Mark Ruffalo) is fun, but the real zing comes from his sparring with a drunken ex-Valkyrie (Tessa Thompson in what will hopefully be a recurring role).