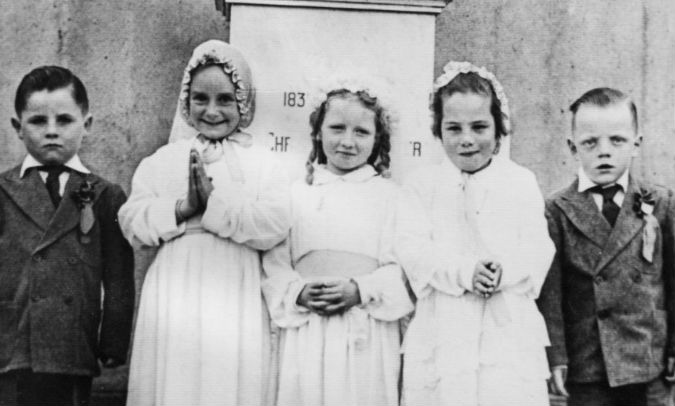 But the dead don’t always stay buried, writes Dan Barry of the scandal of Tuam  for The New York Times. Behold a child. A slight girl all of 6, she leaves the modest family farm, where the father minds the livestock and the mother keeps a painful secret, and walks out to the main road. Off she goes to primary school, off to the Sisters of Mercy.

Her auburn hair in ringlets, this child named Catherine is bound for Tuam, the ancient County Galway town whose name derives from a Latin term for “burial mound.” It is the seat of a Roman Catholic archdiocese, a proud distinction announced by the skyscraping cathedral that for generations has loomed over factory and field.

Two miles into this long-ago Irish morning, the young girl passes through a gantlet of gray formed by high walls along the Dublin Road that seem to thwart sunshine. To her right runs the Parkmore racecourse, where hard-earned shillings are won or lost by a nose. And to her left, the mother and baby home, with glass shards embedded atop its stony enclosure.

Behind this forbidding divide, nuns keep watch over unmarried mothers and their children. Sinners and their illegitimate spawn, it is said. The fallen.

But young Catherine knows only that the children who live within seem to be a different species altogether: sallow, sickly — segregated. “Home babies,” they’re called.

The girl’s long walk ends at the Mercy school, where tardiness might earn you a smarting whack on the hand. The children from the home are always late to school — by design, it seems, to keep them from mingling with “legitimate” students. Their oversize hobnail boots beat a frantic rhythm as they hustle to their likely slap at the schoolhouse door.

A sensitive child, familiar with the sting of playground taunts, Catherine nevertheless decides to repeat a prank she saw a classmate pull on one of these children. She balls up an empty candy wrapper and presents it to a home baby as if it still contains a sweet, then watches as the little girl’s anticipation melts to sad confusion.

Everyone laughs, nearly. This moment will stay with Catherine forever.

After classes end, the home babies hurry back down the Dublin Road in two straight lines, boots tap-tap-tapping, and disappear behind those Gothic walls. Sometimes the dark wooden front door is ajar, and on her way home Catherine thrills at the chance of a stolen peek.

Beyond those glass-fanged walls lay seven acres of Irish suffering. Buried here somewhere are famine victims who succumbed to starvation and fever a century earlier, when the home was a loathed workhouse for the homeless poor.

But they are not alone.

Deep in the distant future, Catherine will expose this property’s appalling truths. She will prompt a national reckoning that will leave the people of Ireland asking themselves: Who were we? Who are we?

At the moment, though, she is only a child. She is walking home to a father tending to the cattle and a mother guarding a secret, away from the Irish town whose very name conjures the buried dead….

Read the full story: THE LOST CHILDREN OF TUAM (The New York Times)

Video: The truth behind Tuam