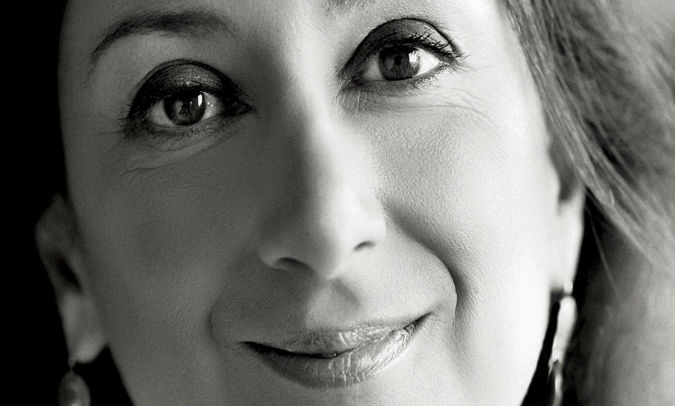 Malta’s government has offered an “unprecedented” €1m (£890m) reward and full protection for anyone with information on who killed an investigative reporter with a car bomb. A government statement, issued on Saturday, called the murder of Daphne Caruana Galizia, 53, whose reporting on corruption targeted the Maltese prime minister and other senior political figures, a “case of extraordinary importance.” The New York Times has the story. The blast from the bomb planted in the rented Peugeot of Malta’s best-known investigative journalist was so powerful it took police investigators four days to collect body parts and wreckage scattered across sun-baked fields next to the road.

Tracking down potential suspects with deep grudges against the victim, Daphne Caruana Galizia, however, will take far longer.

“It is a very long list,” Malta’s prime minister, Joseph Muscat, one of the journalist’s many targets, said in an interview. “She was a very harsh critic of mine.”

The list of people both in Malta and outside whom Ms. Caruana Galizia offended and infuriated as a prolific journalist in this tiny Mediterranean island nation includes many members of Mr Muscat’s ruling Labour Party as well as the leader of the center-right opposition.

Galizia’s last words: ‘There are crooks everywhere you look now. The situation is desperate.’

Also on the list: the president of Azerbaijan and his family, executives of a Chinese electrical equipment manufacturer, foreign drug barons, an Iranian-born banker, and people active in offshore tax havens like Panama and the British Virgin Islands.

All of them were the targets at one time or another of Ms Caruana Galizia’s relentless probing of the underbelly of Malta, the European Union’s smallest country and a nation that boasts Europe’s fastest growing economy but has been hit by six car bombings in the past two years, all of them unsolved.

How a country that has in many ways been so successful could be the scene of such a macabre and brutal murder on a picturesque road only a half-hour’s drive from Malta’s capital, Valletta, has left many asking what went wrong.

In the absence of hard evidence, Maltese are grasping at wild coincidences and conspiracy theories.

The murder took place exactly five years to the hour after the dismissal of Malta’s former senior official in the European Union, the disgraced former health commissioner John Dalli. The murder, Mr. Dalli said, “had absolutely nothing” to do with his own troubles.

Mr Dalli was another regular target of Ms Caruana Galizia’s writing — “Everything she wrote about me was a lie,” he said — and yet another well-connected insider who, despite detailed allegations of corruption, has never been prosecuted in Malta.

Mr Dalli, who in December filed a harassment complaint with the police against Ms. Caruana Galizia, said he “was very angry” when he heard she had been killed. “It basically removed my chances of exculpating myself from everything she said about me,” he said.

Justin Borg-Barthet, a Maltese legal expert who lectures at the University of Aberdeen in Scotland, said the legal system, built up during British colonial rule, has been so steadily eroded by political meddling and constant reshuffling of the police leadership that virtually nobody expects justice to be done in the case of the murdered journalist.

Main image: The Times of Israel