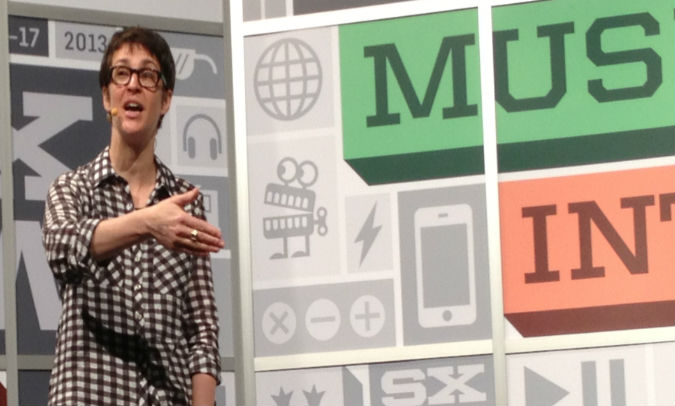 Rachel Maddow permits liberals to enjoy themselves during what may be the most unenjoyable time of their political lives. By Janet Malcolm.

In Rachel Maddow’s office at the MSNBC studios, there is a rack on which hang about thirty elegant women’s jackets in various shades of black and gray.

On almost every week night of the year, at around one minute to nine, Maddow yanks one of these jackets off its hanger, puts it on without looking into a mirror, and races to the studio from which she broadcasts her hour-long TV show, sitting at a sleek desk with a glass top.

As soon as the show is over, she sheds the jacket and gets back into the sweater or T-shirt she was wearing before. She does not have to shed the lower half of her costume, the skirt and high heels that we don’t see because of the desk in front of them but naturally extrapolate from the stylish jacket.

The skirt and heels, it turns out, are an illusion. Maddow never changed out of the baggy jeans and sneakers that are her offstage uniform and onstage private joke.

Next, she removes her contact lenses and puts on horn-rimmed glasses that hide the bluish eyeshadow a makeup man hastily applied two minutes before the show. She now looks like a tall, gangly tomboy instead of the delicately handsome woman with a stylish boy’s bob who appears on the show and is the current sweetheart of liberal cable TV.

Maddow is widely praised for the atmosphere of cheerful civility and accessible braininess that surrounds her stage persona. She is onstage, certainly, and makes no bones about being so. She regularly reminds us of the singularity of her show (“You will hear this nowhere else”; “Very important interview coming up, stay with us”; “Big show coming up tonight”).

Like a carnival barker, she leads us on with tantalizing hints about what is inside the tent.
As I write this, I think of something that subliminally puzzles me as I watch the show. Why do I stay and dumbly watch the commercials instead of getting up to finish washing the dishes?

I sit there mesmerised because Maddow has already mesmerised me. Her performance and those of the actors in the commercials merge into one delicious experience of TV. The Rachel Maddow Show is a piece of sleight of hand presented as a cable news show.

Bread and circuses for liberals

It is TV entertainment at its finest. It permits liberals to enjoy themselves during what may be the most thoroughly unenjoyable time of their political lives.

Maddow’s artistry is most conspicuously displayed in the long monologue—sometimes as long as twenty-four minutes, uninterrupted by commercials—with which her show usually begins.

The monologue of January 2, 2017, is an especially vivid example of Maddow’s extraordinary storytelling. Its donnée was a Times article of December 31, 2016, with the headline “trump’s indonesia projects, still moving ahead, create potential conflicts.”

The story, by Richard C. Paddock, in Jakarta, and Eric Lipton, in Washington, was about the resorts and golf courses that Donald Trump is building in Indonesia and the cast of unsuitable or unsavory characters that have been helping him move the projects along.

Among them are Hary Tanoesoedibjo, Trump’s business partner, a billionaire with political ambitions that might put him into high office in Jakarta; Setya Novanto, the Speaker of the Indonesian House of Representatives, who had to resign when he was accused of trying to extort four billion dollars from an American mining company; and the billionaire investor Carl Icahn, a major shareholder in that mining company, who had recently been named an adviser to the Trump Administration on regulatory matters.

It was one of those stories about Trump’s mired global business dealings which are themselves marked by Trump’s obscurantism, and which tend to mystify and confuse more than clarify—and ultimately to bore. They have too much information and too little…