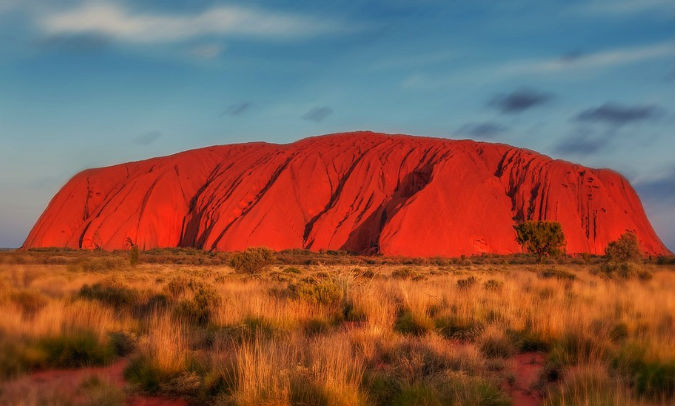 Climb on Uluru? It’s up to the traditional owners to decide, surely

“(Yesterday) the Uluru-Kata Tjuta National Park Board of Management unanimously voted to close the site to climbers. Chairman and senior Traditional Owner Sammy Wilson said the decision to close the climb came after extensive consultation.

‘Over the years Anangu have felt a sense of intimidation, as if someone is holding a gun to our heads to keep it open. Please don’t hold us to ransom,’ he said in an address to the board today.

‘More recently people have come together to focus on it again and it was decided to take it to a broader group of Anangu. They declared it should be closed. This is a sacred place restricted by law.”  — SBS Well, that seems pretty clear, doesn’t it? The traditional owners have decided to close Uluru to climbers. Their place, their rules. And considering for how long we have known that it is forbidden to climb on Uluru because of traditional law, they have been forebearing to say the least until now.

You wouldn’t go to St Mark’s in Venice, or Westminster Abbey, and crampon on to the altar, would you? No. That would be disrespectful…. like the Italian television crew which went into the Great Mosque of Kerouan in Tunisia and decided that would be a lovely cool spot to drink beer after hot day of shooting. They were thrown out, and non-Muslims are no longer allowed inside the mosque itself.

So why is the decision of the Anangu being disputed? They are the traditional owners, they have the say. This decision has been in the offing for decades, and they arrived at it because now the numbers of people respecting their request not to climb has fallen to 16 per cent of visitors, and other tourism activity has developed to counter any loss of revenue from the climbers.

Predictably, Northern Territorians arked up: “Talkback radio and social media lit up with people opposed to the decision to shut the climb from October 2019, made on Wednesday by the Uluru-Kata Tjuta management board. An NT News online poll showed 63 per cent of respondents did not support the ban. But the tourism industry and NT Government reckon they’ll get over it.”

How serious are these respondents to the NT News survey? (Though the NT News might already have a self-selecting group of odd balls among its readers.)

But it seems the odd balls are also in the city. In a segment on Seven’s Sunrise this morning, one of Australia’s soi-disant “leading female journalists,” Samantha Armytage, lined up 3AW’s Drive announcer, Tom Elliott, with someone who is actually a thinker and articulate, Jane Caro.

The problem, according to Tom, is that there is a hodge podge of reasons the traditional owners don’t want people to climb. The actual hodge podge was then revealed to be in Tom’s brain: “Twenty per cent want to climb. Let then climb, I say. Then they say its a holy site. and other people say its not a holy site. Frankly they are going to lose tourist revenue. People love to go and climb the Rock.”

Tom just can’t get a firm handle on if Uluru is like a cathedral or just a rock.  And one of Australia’s leading female journalists is also a bit adrift:  “I am not sure they really know.”

“Well, no one knows,”said Tom. Ah, yes they do, Tom. Are you listening? “This is a sacred place restricted by law.”

Ms Caro then proceeds to school both the students.

Given Tom has such a free and easy attitude to land rights and the entitlement of white people to do what ever they like, we should all go to Melbourne and climb his house…

So here is what actually happened yesterday, and the advance warning given: The Uluru-Kata Tjuta National Park board of management made the decision today to close the climbing path on Uluru, with figures showing only 16 per cent of visitors made the climb during its open times between 2011 and 2015.

The closure is possible under the terms of the Uluru-Kata Tjuta National Park Management Plan 2010-2020, which states that if the proportion of climbers falls below 20 per cent, or if the board believes people will continue to visit the site without being able to climb.

Mr Wilson acknowledged there were some who had different views, but said the views of Traditional Owners needed to be respected.

“Some people, in tourism and government for example, might have been saying we need to keep it open but it’s not their law that lies in this land. It is an extremely important place, not a theme park like Disneyland,” Mr Wilson said.

“If I travel to another country and there is a sacred site, an area of restricted access, I don’t enter or climb it, I respect it. It is the same here for Anangu. We welcome tourists here. We are not stopping tourism, just this activity.”

Director of National Parks Sally Barnes, also a member of the Board, said they had set the firm date of 26 October 2019.

Full story This is not Disneyland here  (SBS)

Image 2: A pretty clear sign of the feelings of the traditional owners, the Anangu

Image 3: Another time, other rules – Prince Charles and the Princess of Wales climb down

All from Wiki Commons