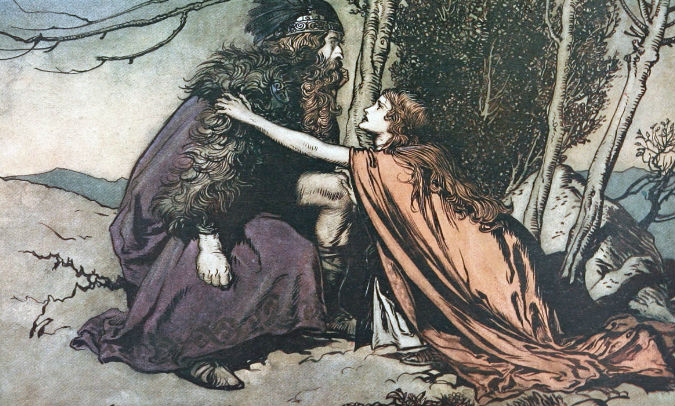 The new Valkyeries: Shield maidens of the alt-right mobilise

Silence is assent… but the more aggressive of the alt-right female supporters are loud and proud in support of the extreme right movements. Seyward Darby reports for Harpers Magazine. A month after Donald Trump took office, an activist named Lana Lokteff (pictured) delivered a speech calling on women to join the political resistance. “Be loud,” Lokteff said in a crisp, assertive voice. “Our enemies have become so arrogant that they count on our silence.”

Lokteff, who is in her late thirties, addressed an audience of a few hundred people seated in a room with beige walls, drab lighting, and dark-red curtains. The location, a building in the historic Södermalm neighborhood of Stockholm, Sweden, had been secured only the previous night, after several other venues had refused to host the event, billed as an “ideas” conference. Lokteff wore a white blouse and a crocheted black shawl over her trim figure, with a microphone headset fitted over her long blond hair. In addition to the attendees seated before her, she spoke to viewers watching a livestream. “When women get involved,” she declared, “a movement becomes a serious threat.”

Since Donald Trump’s election as US President in November, that same idea had inspired more than 4,000 women to contact EMILY’s List, an organisation that backs female pro-choice candidates across the United States, about running for office. It had compelled women to organise a series of marches that brought millions of anti-Trump protesters into streets around the world.

To Lokteff, however, those women were the enemy. She is a member of the “alt-right,” the insurgent white-nationalist faction that backed Trump’s campaign. A motley coalition of online provocateurs, the alt-right opposes political correctness and multiculturalism. Many of its supporters rhapsodise about the eventual creation of white ethnostates in Europe and North America. The group is the offspring of various extremist ideologies — the European New Right, identitarianism, paleoconservatism, and Nazism, to name a few.

The alt-right is widely considered a movement of young white men, and Lokteff was trying to rally women to the cause. “It was women that got Trump elected,” she said. “And, I guess, to be really edgy, it was women that got Hitler elected.” The crowd applauded and cheered.

Lokteff said that “lionesses and shield maidens and Valkyries” would inspire men to fight political battles for the future of white civilization. “What really drives men is women,” she explained, “and, let’s be honest, sex with women.” Lokteff, who has a penchant for diffuse historical references, asked her audience to imagine the vesica piscis, the shape created when two circles intersect, as in a Venn diagram. She pointed out that it adorns the doorways and windows of many old European churches. “It lured people in, making them feel warm,” she said. “To get graphic, the vesica is reminiscent of the vagina.”

Lokteff was the conference’s only female speaker — perhaps because the alt-right has certain ideas about how women should behave. Another presenter, Matt Forney, a fleshy, goateed blogger in his twenties, once wrote a screed called The Case Against Female Self-esteem. In his Stockholm speech, Forney bemoaned social norms telling white men that “your natural masculine instincts, your natural desires to bed and wed women, make you an oppressive misogynist.”

Paul Ramsey, who appeared at the event to decry a purported scourge of left-wing violence in America, is better known to his more than 38,000 Twitter followers as RAMZPAUL. Middle-aged with black, thick-rimmed glasses, he doesn’t embrace the alt-right label, but his views align with those of many in the movement: He thinks women shouldn’t vote, and has called gender equality “the mother of all delusions…”

Full story The Rise of the Valkyries from Harpers here.

Also read: The Cut – The Truth About Women and White Supremacy