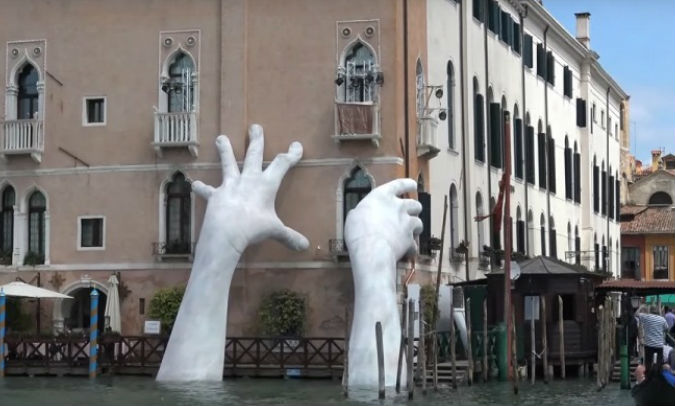 Venice sinks to a new level for its international showcase, The Standard in London reports.

American-Italian artist Lorenzo Quinn  has taken up the cause of climate change with his monumental sculpture for the current Venice Biennale. The London Evening Standard has the story:

Recent visitors to Venice are likely to have noticed a giant pair of white hands emerging from the Grand Canal.

The 30-foot sculpture was installed by the artist on May 12 as part of the Venice Biennale 2017. It shows two giant white hands rising up out of the water, seeming to clutch at the exterior of the luxurious Ca’ Sagredo Hotel.

But it’s not just something to Instagram and walk away from. The arresting sculpture is part-art, part-stand from Quinn against climate change.

It is no secret that Venice, a UNESCO World Heritage site dating back to the 5th century, is disappearing under water.

Named Support, the sculpture is Quinn’s way of drawing attention to just to Venice’s plight, but climate change in general. The hands are designed to both protect and support the hotel, to show man’s ability to both create and destroy.

Main image of Lorenzo Quinn’s hands; other images of works by artist Marco Rizzo in the pool at the Belmond Cipriani.