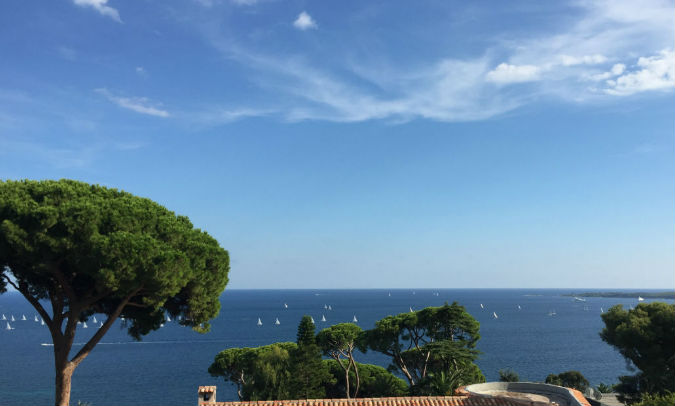 House-swapping can be an out of this world experience

Quandry! A dear friend has just told me she wants to find a house in Sydney to swap for hers next July. She have five bedrooms, four bathrooms, a lovely garden. And did I mention it was in Florence? The Publisher considers another house swap! Temptation flooded through my mind. I offered her my small apartment – two bedrooms, two bathrooms, two terraces, quite a generous living area – but then wondered how she would shoehorn her two teenagers and herself into my apartment.

House swapping is not new to me. I swapped my place for a friend’s in Cannes in September 2016, using it as a base to a France/Italy sojourn  and went back again for two more settled weeks on the Cote d’Azur in April 2017.

At the outset, she knew my place really well, because she had been a frequent visitor when she lived in Sydney. She knew how to get around, had an Opal card, and a frequent viewer book of tickets for the nearby Orpheum. When I was discussing her apartment with her, she tried to describe how big the estate she lived on was, and how steep the road up to the apartment building known as Residence Mayfair.”You will need a car,”she insisted. “You will not be able to carry a gladiolus up that hill and survive.”

I thought she was exaggerating. In fact, she was understating the scale of the hike. The elevation, however, made the views cross Golfe Juan to the south-east, and to the Bay of Cannes to the south west, breathtaking. It had a view of the Isles de Lerins, a box seat for the Cannes Regates Royales and the fireworks which marked the end of the regatta. During my first stay, my friend was still in residence for a couple of days, so she was able to introduce me to the butcher (Chez Pierre @ 32 Avenue de Lérins), the baker, the local supermarche (Carrefour City Cannes)  on 41 Boulevard Alexandre III. They weren’t cheap but they were so handy! It was an invaluable introduction which included the local working men’s resto, the Yacht Club of Cannes dining room, and where to buy those espadrilles.

I also had the name and number for a car service in Cannes, which was inside information from a friend. It proved invaluable in terms of getting to and from the airport in Cannes.

She was not exaggerating however about Mimi, the prostitute, who would park her motor cycle at the layover (!) entry to the Parc Camille Amelie, on La Californie off Avenue Marechal Juin. Mimi was a woman of a certain age, who would collect her clients and then ferry them down to one of her two apartments in Cannes. One of them was for business, the other was home. There was no Mimi on the Lower North Shore, but otherwise the swap was like for like. She had a two bedroom apartment, with two bathrooms (French plumbing!), a large, wrap around terrace, a huge sitting room,  a good sized kitchen, a separate laundry – and views to die for over the Mediterranean.  I took over paying her femme de menage. At my place, she had a view of the servo over the road and no cleaner to bother about paying!

The swap originally included the cars, but I was so nervous the first time, I hired a car because I couldn’t bear the thought of something happening to hers. Ditto the second time, which is how I ended up in a brand new Benz navigating the back streets of Grasse and Vallauris and trying to avoid mad French motorists.

Read more on the insider’s guide to Cannes here.

It worked out extremely well, but you don’t have to friends in exciting place to get into the holiday house swap.

Here are some tips from the experts at The Advertiser:

1. Be honest when describing your home and its neighbourhood. You wouldn’t want to be disappointed with the house you move into, and neither do your exchangers.

2. Be upfront about any pets, plants or pool that need caring for.

3. Make sure you get to know the people you’re exchanging with through email, photos, Skype, phone calls, etc. “By the time you guys swap, you should be friends,” says Ed Kushins. Ask for referrals about prior exchanges.

4. Agree in advance who pays for what in the shape of telephone, electricity bills, staple foods, etc. Some home swap agencies have pro forma contracts.

5. Clear away your valuables or personal belongings into a “no go” zone and leave space for the exchangers’ personal items – bathroom toiletries, for example – so they can feel at home.

6. Leave a guide to your home and its surroundings with emergency contact numbers.

7. Have a friendly neighbour or family member act as a point of contact to hand over keys, pop in and say hello, ensure all goes well, etc.

8. Inform your insurance company in advance. Get copies of exchangers’ driver’s licences if your car is to be included in the swap.

All images except 3 by Christine Hogan

1  Cannes regatta, from the terrace of Residence Mayfair

4 and 5 The sitting room with a view

5: The parking spot, behind Castle Scott

6: Castle Scott overview by Cannes Destination blog. Residence Mayfair can be seen behind