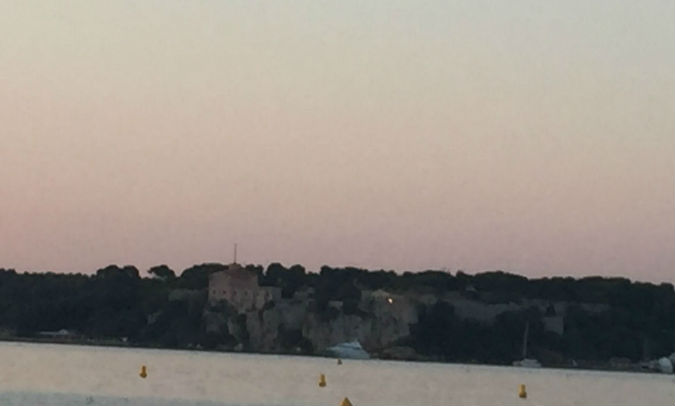 Having spent a month in Cannes during in the past year, Publisher Christine Hogan has arrived at an understanding of the place that comes alive with the Film Festival every May. Oddly enough, there is not that much to do if you are a tourist in Cannes itself – though if you are a visitor for a slightly longer period, it is a great jumping spot for other, richer spots on the Côte d’Azur.

Grasse, for instance. It has turned into a semi-industrial perfume factory in parts, but up the top of the town, where you will find Fragonard (image 1 ) abounding, there are sweet little lanes and lovely themed Fragonard shops which sell everything from accessories to kids’ clothes. And – of course – there is the perfume factory and museum. It’s an easy drive up from the coast, and worthwhile.

And Valauris, up behind Golfe Juan, with its Picasso museum  (image 2 from Wiki Commons) is also worth the visit.

But in Cannes itself you will find the square root of almost zero – no gallery of note, no outstanding historical monument or traces of of great former residents. In all, it’s a conference sort of place, particularly if you hug the Croisette, geared for the film festival, and the TV showcase MIP-Com which takes place every October.

That might suit you down to the ground, allowing you to window shop and go to the beach. However, there are somethings not to be missed. This promenade curves around the bay to the area where the casino is at the far end in a place called Palm Beach. (Lot of American jazz age references here – I lived in California, close to Florida.)

At film festival time, it’s all about star spotting and trying not to be run over by the Bentleys. In the height of summer, the danger zones are created around the Saudi Royals who swarm the joint.

Stroll along the Croisette, then have lunch at the Carlton Beach Club.  (Image 3, the hotel. image 4, the deck of the Beach Club by Christine Hogan.) Order up a rosé and a lobster pasta and watch the view. Beautiful young people are not so well-represented, but there are serried ranks of  super-bronzed women of a certain age in their Gottex swim suits in the beach club shopping for beach cover ups (too late) from touts, dogs, clowns (intentional and otherwise), and desperate elderly men leering wildly.

Beyond the Palais des Festivals

The Palais des Festivals looks as though it has just arrived from Mars. Behind it is an exhibition space for art, bric a brac, whatever. Take the time to have a look, then step out the back onto the dock and be amazed at the boats moored there. The money! The envy! The Majestic Hotel; La Malmaison, a private 19th-century mansion open to the public; the belle époque Carlton Hotel; the more modern Palais Stéphanie (now known as the JW Marriott, image 5), incorporating the façade of the former Palais des Festivals, pulled down in 1988 after serving as the venue for the Cannes Film Festival for 40 years; and the art deco Hotel Martinez (image 6). Martinez is quite nice, and quiet in the garden view rooms at the back. The Hotel Martinez marks the business end of the Croisette, but you should go the full length. Go around the coast past Port-Canto to the Pointe de la Croisette (Little Cross) headland. Now you have arrived at the casino. Have lunch at the Yacht Club de Cannes, looking back to the town (image above) and the old quarter of  Le Suquet. Here lunch will cost you about 20 euros and include a pichet of  rosé. After lunch and that walk, it’s time to go home for a snooze.

In the past, Cannes was a fishing village concentrated on Suquet hill. It’s a surging labyrinth of small streets  and steep stairways. It’s been colonised now by smart bars, restaurants and shops. It’s a bit touristy but a nice change from the front. At the top of Suquet Hill, visit Musee Le Castre,  an 11th-century edifice which was home away from home for the monks of Lérins (see below). Now it’s an eclectic museum well worth a look on the first Sunday of the month from November to March, when entry is free. The views from the top of the tower (109 steps!) are outstanding. The back streets around the station

This is my favourite part of Cannes. There is a morning Gambetta market (image 7 above). Walk past the railway station going east along rue Jean Jaures to Place Gambetta. In addition to all the great foods here you will also find clothes, shoes, jewellery and leather goods. Open every day 7am to 1pm, except Mondays in winter.

Again a great selection of shops all around and a lot of bars and restaurants, including those on the pedestrianised Rue Hoche just off the square. Also in rue Jean Jaures and rue Marceau, you will find an Asian supermarket, including fruit and veg; Kosher stores; delis; butchers; and wine shops. There is a small Monoprix supermarket – open till late at night – opposite the market. And there is a great kitchen shop just opposite the market.

Great spot to window shop (image 8), nose about, and generally have some fun. Hard to find a good pair of espadrilles here though…

I saw them every morning from my balcony in Californie. About 15 minutes offshore from Cannes lie Ile Ste-Marguérite, and Ile St-Honorat (main image). Ferries to the islands leave from Quai Laubeuf, on the western side of the old port in Cannes.

Ile Ste-Marguérite is the larger of the two islands. Have a look at Fort Royal, prison for the Man In The Iron Mask. He was incarcerated there for 10 years from 1687.

Ile St Honorat belongs to  the monks of the Cistercian Congregation of the Immaculate Conception. There are some 25 of them in the island monastery. In the Middle Ages, the original monastery – founded in the fourth century by  St Honorat – was among the most important in Christendom. Popes visited, pilgrims arrived, and the monks effectively governed Cannes from la Castre.

Saint Honorat Island is a small lush garden – with vineyards, providing expensive locally produced wines and a couple of restaurants. One of them is La Tonnelle, a haven of peace with a relaxed, convivial atmosphere, offers views over the Med. Bit different 1000 years ago – St Honorat was a defensive line against the Saracens.

The restaurant is open every day at lunchtime. A menu based on fresh, colourful, seasonal dishes full of Provencal flavours: Salads, grilled fish, meat and seafood complemented by the renowned wines and liqueurs produced by the monks from their vineyards on the island.

La Tonnelle also offers a range of possibilities for your business lunches or family gatherings as well as a wine bar and tearoom. A snack bar is also available from May to mid-September.

For how to get there, click on this link.