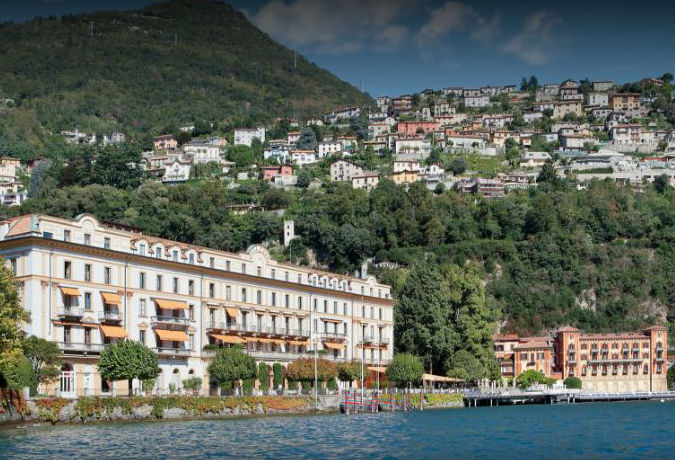 A lake with a certain cachet: Como à go go!

Ever since George Clooney moved into the Villa Oleandra (Image 1 below) and dragged his super-cool pals from Ocean’s 11, 12, etc. on to its shores, Italy’s Lake Como remains the hottest summer retreat in Europe for the rich and the famous – and the Villa d’Este (main image) is its focal point. Even if you have never have been to Lake Como, there’s a very good chance you have seen it. The glacial lake – caught among the foothills of the Alps and edged by steep, jagged peaks – has become visual shorthand for film directors who want to transmit instantly the idea of Paradise.

Alfred Hitchcock set part of his first film The Pleasure Garden here in 1925, on the site of Lake Como’s exquisite Villa d’Este (main photo). And it was also here in 1995 that Vanessa Redgrave and Uma Thurman played opposite Edward Fox in the film version of H E Bates’ story, A Month by the Lake, and Anakin Skywalker first kissed and later married Padmé Amidala in 2000’s Star Wars II Attack of the Clones. In both these films, the Villa Balbianello (Image 2) at Lenno, half way up Como’s western reach – imagine an upside down Y and you have the idea of it – was the architectural star of the show. In Ocean’s 12, Villa Erba starred as Nightfox’s den (Image 3). It was the Villa d’Este’s turn again to star when the cast and crew of The Other Man shot some scenes around the swankiest hotel on the swankiest stretch of still water in the world. The presence of the film’s principals Liam Neeson, Laura Linney, and Antonio Banderas (Image 4) went largely unnoticed since the hotel had not yet opened for its season.

But even in high season, the hotel is remarkably unfazed by Hollywood glitz.  After all, kings and queens, princes of the Church and presidents, professional lounge lizards, serial adulterers, dictators, and murderers have all passed through its grand hall. So movie stars are just to be expected, really. And they are treated precisely as all the guests are – with a gentle mixture of courtesy, kindness and supreme efficiency.

Saying no to Tom Cruise and Katie Holmes

All this egalitarianism, even at the VDE’s most elite level, was something that Tom Cruise and Katie Holmes couldn’t quite come at when they were looking for a divine location for their 2006 wedding. Pointed in the direction of the hotel by their mate Clooney, Tom and Kate were interested in the location – Katie even called in with a phalanx of wedding planners.

Demands were stated – and those included having the hotel’s management sign an agreement that no unauthorised shots by paparazzi, professional and otherwise – of the wedding would be taken, not even from Lake Como itself. Recognising that they were good, indeed very good, at guarding the privacy of their guests but not good enough to shut down determined paps afloat, the Villa d’Este executives declined with thanks, and Katie Holmes moved her wedding south to a more controllable, if less celestial, location outside Rome.

Shame, really. It would have been perfect and they could have shared a little of the cachet attached to the lake – then called Larius – since it was first settled by the Romans. Como (then Comum) was colonised by 3000 Latins between 81 and 77 BC – to ensure quick routes for the Roman legions through the Alps to the north.

“There he found the loveliness of a dream.”

By the first century AD, Pliny the Elder and his nephew, Pliny the Younger, were hymning its praises. “Do you study or go a fishing/ Or ride a hunting/Or do all these things together?/ Since our Larius gives you an opportunity for them all,” wrote the Younger, from one of his villas, called (natch) Comedia and Tragedia, near Bellagio (Image 5), a place at the junction of the Como Y called by some ‘the prettiest village in Europe’.

So for two thousand years, the lake has been recognised as gorgeous and declared so by almost everyone who has seen it in real life. Poets from Virgil and Catullus, to Shelley, Tennyson, Wordsworth and Longfellow, have surrendered to it. Gustave Flaubert wrote of it: “The lake in its entirety is sweet, amorous and Italian. Steep banks, warm colours, all surrounded by dwellings made for study and love.”

The siren call of the Riva d’Oro

Edith Wharton, perhaps the world’s most literary gardening writer was a little more decorous: “The rich leafage of walnut, acacia and cypress, the glimpses of the blue lake below, the rush of mountain’s torrent, make this bosco at the Villa d’Este one of the most enchanting bits of sylvan gardening in Italy.” Frances Hodgson Burnett, the author of The Secret Garden, was equally transported in 1911 when she wrote: “As the golden summer changed into the deep golden autumn, he went to Lake Como. There he found the loveliness of a dream.” Can it possibly be as good as everyone says? And what makes it so great, given that clutches of Russian oligarchs loaded with sacks of money descended on the place up till the Global Financial Crisis of 2008 trying to buy up the best of the villas which perch on the Riva d’Oro the highly desirable stretch of lake frontage which gets the morning sun and runs eight kilometres from Como town up towards Laglio where the Clooney villa is sited? Some of them succeeded in driving real estate prices here sky high while driving the locals mad with their insane demands and their boorish manners.

The simple answer is yes, it’s the best. Don’t listen to the lunatics who plump for Italy’s other great lakes, Maggiore which snakes up into Switzerland (reason enough surely not to care for it), or Garda, with its flat landscapes and grey, windy sweeps water. You need only know that the Italian writer Gabriele d’Annunzio established his extremely odd and overblown house, Il Vittoriale on its shores, or that the Italian Socialist Republic of Salò was headquartered here by Mussolini, to understand that Garda is just not quite right.

A spectacular setting for a thunderstorm

Back to Lake Como. First of all, it is astonishingly beautiful. That is a given, and remains a constant. The air is crisp, the storms spectacular, the food wonderful, and the natives friendly. And it’s just an hour by road from Milan and two international airports.

But the lake, even though it is one of the most polluted in Europe (watch the pool attendants at the Villa d’Este run to fish out any guest who somehow manages to escape the floating pool on the lake or the heated indoor pool in the sports centre and try to swim in it), is now all about exclusivity.

That is part of what drew the stylist Gianni Versace here from the distressing climate of Milan when it sizzles. He acquired Villa Le Fontanelle at Moltrasio before the current Como fever set in and his family retained the property until it was auctioned off at the peak of an over-heated market by Sotheby’s in March, 2008. Now it is owned by the Russian millionaire Arkady Novikov who bought it for 33 million Euros. Within months, Mr Novikov would have discovered this was hardly an ideal real estate market to be buying into.

Far from the madding crowd – Milano!

Villas like the pale yellow Versace house on the lake are scarcer than hen’s teeth thanks to the fact that they rarely change hands. There are an estimated 200 of them, tops. They are held in local families for generations and if you want one, you will have to have millions of Euros and be prepared to court the current owners assiduously, maybe even sacrifice your first born son in marriage. And you will also have to be discreet: Richard Branson, never known particularly for that quality, was said to have recently bought Villa la Cassinella at Lenno, but no one is owning up.

Obviously, moving in here is not impossible. Signor Clooney got Villa Oleandra at Laglio for an estimated US$10 million when the previous owners, the Heinz family, sold up. Among those who have also acquired property here include Kazahk oil billionaire, Nurlan Kapparov, and the American private equity investor Jim Cantwell snapped up Villa Passalacqua, a house now said to be worth in excess of US$87 million. Put the steep hike in prices – up to tenfold – down to the Clooney factor. Heaven help this bubble if George ever pulls out.

Apparently the Italian media magnate Silvio Berlusconi was also looking to buy for his daughter, but given that the stock is limited – just a couple of hundred around the lake and only a couple of dozen with the appeal of Villa Oleandra or Villa Passalacqua – this is a project which might take him and anyone else who wants to buy into the ‘’loveliness of a dream” some considerable time. Still, he can always visit.

Stop! Who goes there?

For the money to buy into one of the world’s top 20 places to live at the Sacro Monte di Ossuccio located between olive groves and woods on the western edge of the lake facing Isola Comacina. There should be enough scope here in the fifteen Baroque chapels, built between 1635 and 1710 and dedicated to the Mysteries of the Rosary dotted along the way that leads to the Monastery. In 2003, it was put on UNESCO’s World Heritage List.

The gardens here are extraordinary, thanks to the presence of the lake, which makes for a particularly mild climate. Not to be missed are those at the Villa Carlotta, built in 1690 at Tremezzo, which looks towards the Bellagio peninsula, and where Stendahl stayed in 1818.

The Villa d’Este, built in 1568, boasts landscaped gardens in the English style. Morning tea in the hotel will allow the opportunity to walk through the grounds.

The Villa Serbelloni at Bellagio believed to have been built on the site of Pliny the Younger’s villa Tragedia, is set in a park created at the end of the eighteenth century.