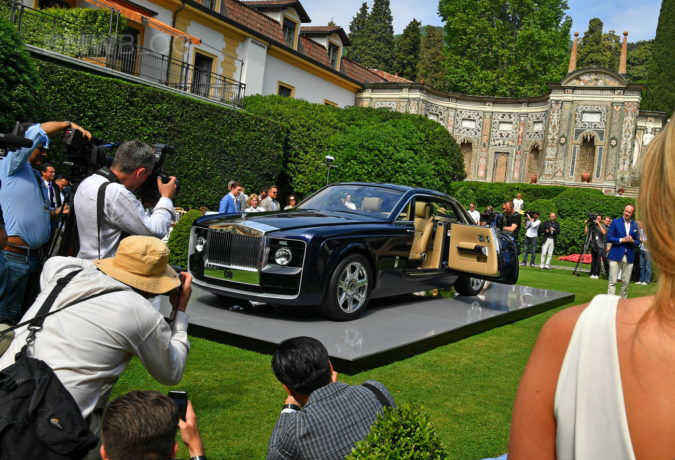 RR bespoke: The Sweptail is the most expensive car ever made

Approximately one year ago, Rolls-Royce presented 103EX to the world, invoking its coach building heritage to inspire its future clientele. This Vision Vehicle envisaged a world of completely personal luxury mobility where new technologies would allow every Rolls-Royce to be designed in their owners’ image, should they wish.

Such a Rolls-Royce would represent the truest meaning of luxury – a personal, Bespoke motor car like no other for each individual commissioning patron.

The mere idea of a modern coachbuilt Rolls-Royce was not enough for one Rolls-Royce connoisseur, however. This individual approached the marque with his own idea of a two-seat Rolls-Royce that he wanted to be created in the here and now. That motor car, christened Sweptail in a nod to the swept-tail of certain Rolls-Royces from the 1920s,   reimagines this feature on his one-off motor car.

Presenting the car to the media at the Concorso d’Eleganza at Villa d’Este in Spring 2017, Torsten Müller-Ötvös, Chief Executive Officer, Rolls-Royce Motor Cars said: “Sweptail is a truly magnificent car. It exudes the romance of travel for its own sake, and immediately places Sweptail in the pantheon of the world’s great intercontinental tourers.”

Through this commission, Rolls-Royce has proven once again to be the world’s leading luxury goods provider.

“Sweptail is the automotive equivalent of haute couture,” comments Giles Taylor, Director of Design at Rolls-Royce Motor Cars. “It is a Rolls-Royce designed and hand-tailored to fit a specific customer. This customer came to the House of Rolls-Royce with an idea, shared in the creative process where we advised him on his cloth, and then we tailored that cloth to him. You might say we cut the cloth for the suit of clothes that he will be judged by.”

A special order for a special client

In 2013, Rolls-Royce was approached by one of its most valued customers with a very particular request. A connoisseur and collector of distinctive, one-off items including super-yachts and private aircraft, this gentleman came to Rolls-Royce to realise his vision of a one-off luxury motor car like no other.

The client immediately established a close rapport with the design department led by Taylor, who set about bringing the idea to life.

Inspired by the beautiful coachbuilt Rolls-Royces of the 1920s and 1930s, the client’s desire was for a coachbuilt two seater coupé featuring a large panoramic glass roof. As a connoisseur of Rolls-Royces, he was inspired by many of his favourite cars from the marque’s golden era of the early 20th Century, as well as many classic and modern yachts.

This is what he liked: The grandeur, scale, flamboyance and drama of the 1925 Phantom I Round Door built by Jonckheere; the svelte tapering glasshouse, dramatic dash to axle proportion and up-sweep of the rear departure angle of the 1934 Phantom II Streamline Saloon by Park Ward; the elegantly falling waist-rail, swept tail coachwork of the 1934 Gurney Nutting Phantom II Two Door Light Saloon, and the flowing roofline, rising departure angle, and again the swept tail coachwork of the 1934 Park Ward 20/25 Limousine Coupé were all considered by today’s Rolls-Royce designers in the creation of this very distinctive motor car.

Over the course of a number of years, Taylor and his team of designers engaged with the client in an intellectual journey as they worked together to realise the customer’s distinct vision and bring it to life.

“Our job was to guide, edit and finely hone the lines that would ultimately give our client this most perfect of Rolls-Royces,” comments Taylor and the result of this one-off coach build project is the completely unique Rolls-Royce Sweptail.

A distinct vision – and a HUGE grill

The Sweptail is without question a Rolls-Royce that fits to the marque’s DNA. Its initial formality when seen from the front signals that this is one very different and distinct Rolls-Royce. One’s attention is first attracted by the confident and solid character of the front profile, centred on a new treatment of the iconic Rolls-Royce Pantheon grille. The largest of any modern era Rolls-Royce, the grille is milled from solid aluminium before being painstakingly polished by hand to a mirror finish. The periphery of the front face of Sweptail is framed in brushed aluminium.

The highlight feature of Sweptail however is that specifically asked for by the client. An uninterrupted glass roof, one of the largest and most complex ever seen on a motor car of any marque, allows the cabin to be flooded with natural light, animating a host of beautifully handcrafted materials and componentry.

So how much? The RR Sweptail set back this client some US$13 million. But it does come with a special compartment to keep the champagne chilled to the correct temperature. So that’s cool, but not cheap. And for that money, many of us would like the doors to open properly, too.

Full story in The Drive here.