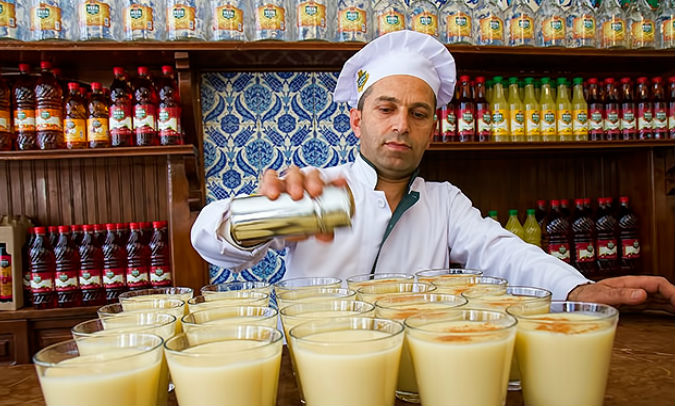 Boza: History and recipe of a special Turkish delight

When the winter comes a traditional and historic drink, boza, colours up Istanbul’s cold, grey days, writes Erlends Geerts for The Istanbul Insider

Boza with its nutritious thick texture cools you down. If you happen to be in Istanbul during winter, it most definitely offers a different experience to your taste buds.

One of the oldest Turkish beverages, it is made from fermented grains. In some countries, durum wheat is used and in other countries corn, barley, rye, oats, wheat, buckwheat … It also contains nutritious elements such as protein, calcium, iron, zinc, phosphorus, thiamine, riboflavin, and niacin.

This barley-based warmer gives your stomach a full feeling, so it’s better not to drink it during or right before your meal.

Central Asian Turks began to make boza in the 10th century. In the 16th century, Sultan Selim II banned it because of the opium used in the mixture. Also in the 17th century, boza got its share from the alcoholic drinks prohibition of Sultan Mehmet IV since excessive fermentation caused a higher alcoholic level. In the 17h century, Turkish traveller Evliya Çelebi reported that  janissaries in the army loved it and it contained a low level of alcohol. So, it was tolerated due to its warming and strengthening effect for the soldiers.

By the 19th century, the sweet and non-alcoholic version became popular at the Ottoman Palace, and also in society.

Where to drink it

Hacı Sadık Bey is the founder of today’s most well-known brand, Vefa. In 1870 he immigrated from Albania and settled in the Vefa district in Istanbul. He reinterpreted exiting version – the thin and sour boza. His was thicker, less tart, and became a brand in 1876. Today the brand still produces boza between October and April.

A few decades ago, you could hear boza sellers shouting to sell freshly prepared boza on the streets during winter evenings. Parallel with the industrial development and rapid growing consumption patterns, it claimed its place in the stores since the early 2000s.

Where to find it

During the winter you can find boza almost everywhere: in supermarkets, patisseries and cafes. Pay a visit to the historic Vefa Bozacısı in Vefa Fatih, Katip Çelebi Cad. No:104/1. General Kamal Atatürk, first President of modern Turkey, drank boza in this shop with its beautiful blue and white tiles, and his glass is still on display.