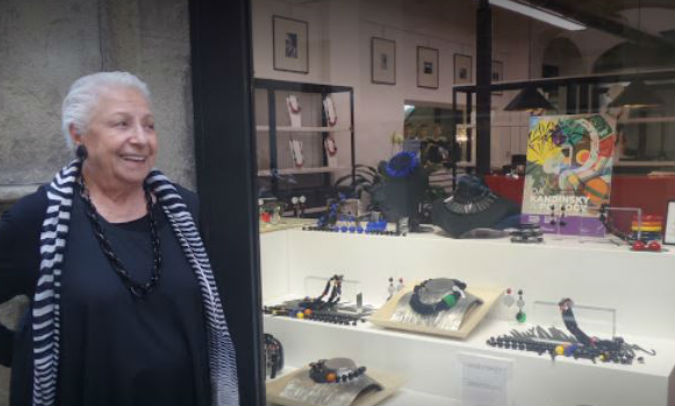 A couple of years ago, the Publisher of 47 Plus had never heard of Angela Caputi. Then, a visit to Florence with a Caputi fanatic changed all that. Now she plans European trips around treks to Caputi boutiques in Florence and Milan. A Caputi tragic reports… There is a website, but no on line sales. Once an item is sold out, that’s it… as I discovered to my chagrin when my first treasured piece was stolen in a hotel in Hobart.

The shops are not so easy to find, either… and their opening hours are very Italian.

But when you get into one of the little Caputi jewel boxes, the effort is worth the effort. Now, you find yourself absolutely dazzled – the materials, the colours, the wittiness. You have to choose. And that is when the nightmare begins.

Here, traditional craftsmanship and techniques of the past fuse into what we recognise as the Italian design aesthetic.

Angela Caputi melds modern styling with traditional handmade craftsmanship and creates the most arresting stunning statement jewellery. Walking into her stores and showroom is breathtaking. The company began in 1975,  producing pieces inspired by the glamour of 1940’s Hollywood. Forty-plus years on, Angela Caputi is a well-recognised name in high fashion costume jewellery. Her designs have been seen  in fashion exhibitions at the Palazzo Pitti and Palazzo Strozzi in Florence,  and in New York at The Metropolitan Museum of Art).

The designer’s passion for elegant yet modern design is evident both in her designs and her boutiques. The stores are a crisp, monochrome paltette, a perfect foil to bejewelled pieces of art displayed in serried ranks of black lined trays.  Fall into those trays and you will not emerge the same!

Each piece of an Angela Caputi design is jewellery is original, and combines plastics and resin to create amusing and bright which are as entertaining as they are decorative.

One recent collection, Mare, drew its inspiration  from the coral and shell shapes from the Mediterannean. There are also animal pieces – my black panther gripping a red ball brooch is always commented on, and she uses aninmal motifs constantly.  There have been earrings featuring Michelangelo’s David, and other which draw their visual sources from the Ottoman Empire, or just the shapes and surfaces of Nature herself. All the pieces are handmade in Angela Caputi’s  Oltrarno workshop. , using locally, made in Italy, produced resin.

Besides the flagship store on Via di Santo Spirito, there is a second shop on Borgo Santi Apostoli, by the river Arno at Ponte Santa Trinita, which also sells wonderful handbags and clothing.

3 and 4: Istanbul and Ocean