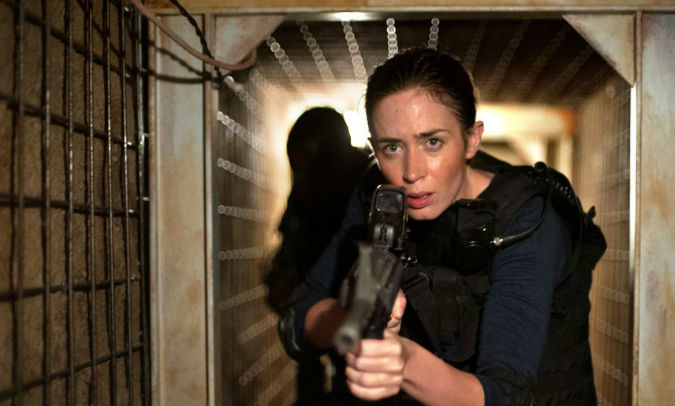 What to watch this weekend… Sicario and two TV binges

Slim pickings on TV now, as the old year creaks to a close… even the venerable The Block is closing up shop for the year. Two series and a movie – Sicario – should keep you happy this weekend on Netflix. Plenty of directors make violent movies. Denis Villeneuve makes movies about violence, which is not quite the same thing.

A Canadian filmmaker equally comfortable in French and English, he is especially interested in preludes and aftermaths, in the tense moments before the eruption of violence and in the shock and confusion that follow.

His framing, cutting and sound design evoke the feelings that motivate and arise from the shedding of blood: rage, grief, steely resolve and wild panic.

Mr. Villeneuve’s 2009 feature, Polytechnique, was the almost unbearably meticulous reconstruction of an actual mass shooting at a Montreal university. He followed it with Incendies, a grim family chronicle set mainly in a thinly fictionalized Lebanon during that country’s long civil war.

Sicario visits a different war zone: The United States-Mexico border, where the murderous business practices of the Mexican drug cartels threaten to bleed across the Rio Grande.

The dry, menacing scenery surveyed in Sicario is real, of course, as are some of the aspects of its harrowing story.

But the desert and the drug war — a landscape evoking old westerns populated with a new cast of outlaws and would-be sheriffs — has also become fertile pop-cultural ground.

We know the territory, thematic and geographic, from No Country for Old Men and Breaking Bad, from The Counselor and Traffic and even Weeds.

It’s not easy, and he doesn’t entirely succeed. But he’s also trying to scramble some of the usual codes, and to paint a morally complicated picture instead of restaging a morality play….

Ozark, from part of the team behind Ben Affleck’s The Accountant, is the latest example of  stress-watching television.

A combination of Breaking Bad and Bloodline, Ozark sees a money launderer (Jason Bateman) and his wife (Laura Linney) move from Chicago to backwoods Missouri in an effort to clean $8 million in three months, lest their entire family be killed by a Mexican drug cartel.

It’s not a fun show, and it’s barely entertaining, but like Bloodline, it’s the kind of series where the viewer is anxious to binge through it just to see if the antagonists will survive and how.

It’s a seedy, well-written, well-acted series, and Bateman is terrific, but the entire point of Ozark is to put the viewer through the wringer: It’s tense, and stressful, and we don’t watch for resolution; we watch for relief.

Bloodline is engrossing, so much so that somewhere along the way, you may find yourself wondering if you skipped an episode.

You’ll start in on episode 7, fall into a trance, and wake up somewhere around episode 10, wondering what happened to the last four hours of your life.

Ben Mendelsohn will hook you immediately, but after four or five episodes into season one — once the pieces begin to fall into place — the story will sweep you along toward the dark and sickly satisfying end, capping the season off with four of the best episodes in the short but stellar history of Netflix’s original programming.

Unfortunately, the second season — while still a fine season of TV — doesn’t live up to the first.