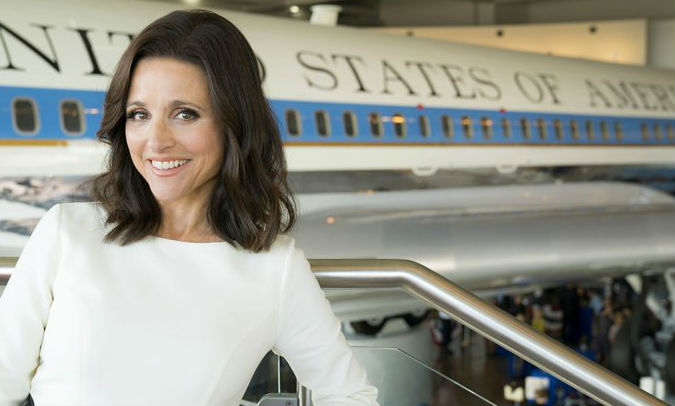 Is this the most wickedly funny show to stream?

The incomparable Julia Louis-Dreyfus has just won her third Emmy in a row for her tour de force role as Veep/Prez/feather duster Selena Meyers on HBO’s VEEP.  Enjoy it while you can… Seven Seven will its last. Here is a look at this year’s season. It is still brilliant after all these years, writes The Hollywood Reporter. When Armando Iannucci created Veep for HBO, it was not just a great gift to comedy (and continued to be when David Mandel took over as show-runner in last year’s fifth season), but it was also the most absurd and vicious depiction of politics since Iannucci’s own The Thick of It for British television.

The fictional incompetency, stupidity and craven representation of the people’s will stood out as a searing send-up of real-life politics until, well, reality trumped it.

So, in the aftermath of an almost unfathomable, surreal campaign and the election of Donald Trump as president, it was only natural for Veep fans to wonder — in the months leading up to this sixth season — how in the world a TV show could top reality.

As Mandel put to rest in the pages of The Hollywood Reporter already (and anyone who follows the long creative cycle of television could have told you), Veep was never going to get caught looking like a pale imitation of Washington under Trump. Long before last season ended, Mandel and series star Julia Louis-Dreyfus had mapped out a story arc where Vice President turned President Selina Meyer’s political run that culminated in an election tie (season four finale) would come to an end with her loss in the season five finale. The story-line was set before history took that weird turn.

Fake Veep cast into the shade by the real Prez

Not being in the White House removed the burden of Louis-Dreyfus, Mandel and the rest of the astoundingly funny Veep cast having to take a backseat to the incompetence (which has been, sometimes, face-palmingly funny) of the real American president.

Instead, with Meyer as a way-less-than-one-and-done president, more comedy can be mined from the outside while the show thankfully avoids any comparisons to real-life events (and no, they never planned for Meyer’s defeat to feel like Hillary Clinton’s either, so scratch that).

As the show begins anew, Mandel gets to keep Veep as blisteringly funny and fearless as before without any unwanted or unwarranted comparisons. (As the showrunner wondered in THR, what would it have been like to still have Matt Walsh playing the painfully incompetent press secretary Mike McLintock when you’ve already got the real-life Sean Spicer, not to mention Melissa McCarthy’s searing send-up on Saturday Night Live?)

Instead, with the Meyer White House players scattered into the wind for various other unfulfilling and nightmarish jobs, Mandel and the show’s writers (so much talent there, by the way) are able to branch out in ways that are fresh but keep the DNA of the series intact.