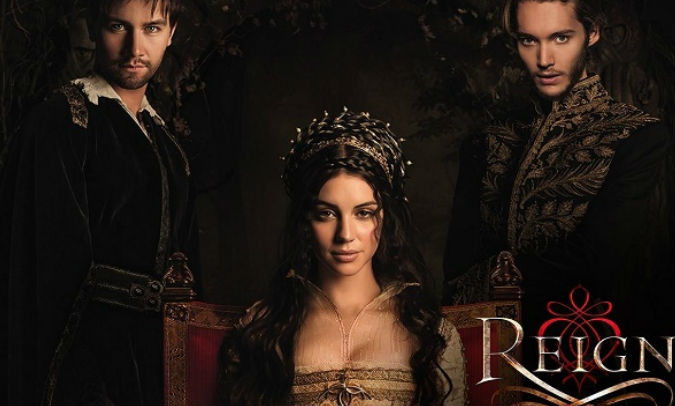 As they Reign, Tudor and Stuart queens are the new Mean Girls

Another theocracy, another fertility crisis. Welcome to Reign. But it is no Handmaid’s Tale. Tim Goodman wastes an hour of his time so you don’t have to waste yours. Apparently Mary, Queen of Scots is too boring for series creator Laurie McCarthy, so she constructs a ridiculous love triangle around young, dumb Mary Queen of Scots and hires an actress who thinks teenage girls aren’t into, you know, being educated.

That’s why they’ll accept a wafer-thin slice of sugary stupidity like Reign and the United States can continue its precipitous slide down the intelligence rankings of first world countries. Well, that’s what I got out of the pilot, anyway. Oh, and Nostradamus is a hunk

Reign brings historical absurdism to new levels and reveals just how dumb The CW must think its audience is to accept such fantasy as fact because real history is “hard” — especially for a girl. In short, The CW is ruining the country.

Reign, is so relentlessly bad, so passionately inept, that  the network felt compelled to defend to critics its right to take the story of Mary, Queen of Scots, and turn it into something immune to facts (because facts would make it boring to teenage girls) and maintain that interpreting history as nonsensical teen pabulum was the God-given right of creator and executive producer Laurie McCarthy.

Stretching the boundaries of historical absurdism, McCarthy has created an entirely fictional love triangle in Reign. You’ve got Prince Francis, son of the French king, who was a sickly 14-year-old in real life (with undescended testicles) , not the robust, handsome, womanizing young stud portrayed by Toby Regbo in Reign. Then there’s Wooden Mary (Adelaide Kane) and Francis’ half-brother, the King’s bastard  (Torrance Coombs), who never existed.

You know, because history is boring and Mary led such a dull life, let’s set up a love triangle. And let’s call the made-up brother Bash.

Let’s leave poor Tim there. Here is his full review. So onward we go without him.

Bash is glowering night, saturnine and gloomy, to Francis’ sunny, kindly and honourable aspect (except for that part where he nicked off to Paris and had a one-night stand with Mary’s best friend and handmaiden, Lady Lola. (And there was a baby! Except hang on, no there wasn’t in real life.)

There is a sister, too, called Claude, who appears later as a foot-stomping, willful tosser of curls. The real life Claude was married at 11 to the Duc of Lorraine and died in childbirth at the age of 27 after having birthed nine children. She was also suffered from a hunchback and club foot – no sign of either in Reign. Reign’s Claude is a problem child who eventually falls in love with a kitchen hand on the rise… who is stabbed and left to dead by the agent of a jealous suitor…

And let’s not get started on Queen Elizabeth. She is played by Canadian actor Rachel Skarsten with vowels so strangled she really needed a trip to 24 Hours in Emergency to sort things out. At least her wardrobe looks right (unlike the “Elizabethan” sets) and not like she is off to the school prom like Queen Mary’s household strumpets.

You get the drift. Chewing through the scenery though are Megan Follows (Anne of Green Gables all grown up) as Catherine de’ Medici, and New Zealandetr Craig Parker as Lord Narcisse, Chancellor of France. Narcisse also a figment of the collective Reign imagination but that sibalance  gives the watcher an obvious shorthand to his Slytherin nature.

Find Reign on iTunes if you must.