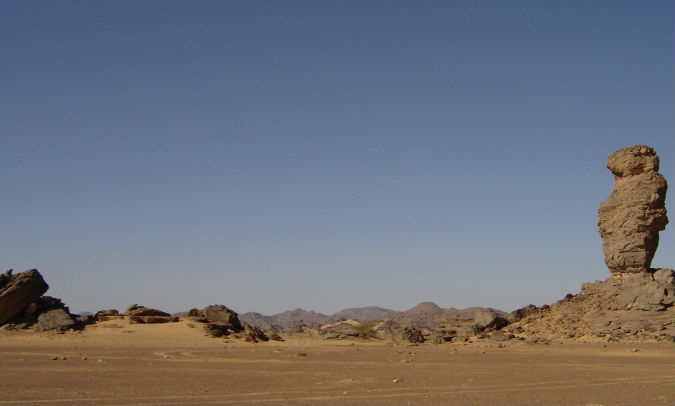 Things we lost in the Arab spring, 1: Camping with Touareg

An opportunity to visit the southern-most outposts of the Ancient Roman Empire in Libya was not to be missed, writes Publisher Christine Hogan. And now, after seven visits to the Libyan Sahara, all she can do now is dream of those unforgettable North African nights – and days. At dusk, the dunes of the Sahara seemed like sleek suede, even when they were the frightful fish-fash (fine, super-soft sand). In the middle of this immense beauty, everything was except still except for an occasional clatter of plates: Abu Bakr, our cook, was organising dinner.

He calmly pulled the elements of a meal for ten from the back of a truck and passed them over two gas rings. A loaves and fishes-type meal of soup then macaroni duly appeared. At the end of my first day in desert, it seemed appropriately miraculous.

After dinner, I happily found my one-person tent and snuggled into my sleeping bag. As my head hit the figurative sand, I was lulled to sleep by the singing of our Libyan team of six, including four Touareg, the tribe renowned as the Blue Men of the Sahara. Fortified by strong mint tea created in a ceremony almost as elaborate as something you might find in Japan, the Libyans settled in around the campfire for the first of the concerts of singing and conversation that became a favourite, nightly feature of our trip.

I awoke in the slight chill of 4am to discover, through the transparent skylight in my tent, that the moon had finally set. And there it was – the desert at its most entrancing; silent (apart from a chorus of snores from the other tents and under the trucks) and eternal.

The romance of the desert written in the stars

A quarter of a universe of stars pricked the lightening darkness. Dawn was coming and I wanted someone to quote The Rubaiyat of Omar Khayyam to me: “Awake! for Morning in the Bowl of Night/Has flung the Stone which puts the stars to flight”. While there was no poetry recital, there was, however, on cue, a shooting star.

Desert? Tent? Sleeping bag? Touareg? Say what? None of these words had ever been linked to me in this or possibly in any previous life. And yet, here I was in the middle of a sea of rose red sand – the nearest (formal) bathroom an unknowable distance away – embarking on an extraordinary adventure. A phone call announced an invitation: Would I like to join a familiarisation trip organised by the Continuing Education Centre at Sydney University to preview a tour to the southern-most outskirts of the Ancient Roman Empire planned for later this year (for details, see below).

The unheard destinations were mysterious, words I scribbled on the back of an envelope during that call: Ghadames; Derj, a mud-brick city on the way to there; Germa; the Akakus mountains; the oasis belt of the Ubari lakes, including Umm al-Maa. These were places with names that could hardly be transcribed, let alone pronounced.

Despite the charm of the idea of the Sahara, I had reservations about the reality of Libya – the first about the general stability of the country and the second about particular security for travellers. But the Lonely Planet guide said it was safe so I had the shots (diphtheria, tetanus and typhoid, topped up the Heps A and B and polio, but passed on the rabies vaccination), put together a first aid kit that would have done a small field hospital proud, bought a sleeping bag and went. The trip started properly in Sebha, an hour by air south of the Libyan capital Tripoli. On that first morning, we met our Touareg team: the drivers, Milad (at 55, he has worked through this part of the desert with his camel driving father since he was a child of five and was by then known, rather reassuringly, as the Fox of the Desert); Massod; and Omar.

They all seemed related in some way, but it was as hard to work out the genealogy of the team as it would to understand how Milad and Omar navigated shifting dunes with no apparent, fixed landmarks. As well, there was Abu Bakr. In their kit of long tunics over trousers – complete with headdresses – they looked splendid. I could hardly wait to get into one of those turbans.

Our group of 10 was completed by our assigned tourist policeman, Hakim (every tourist group gets one: ours was handsome, sweet, and very useful dealing with local policemen and handy for herding us through crowds); the team leader, Salah Amura; and Sydney University’s touring party of four.

We climbed in three four-wheel drives and headed towards the Fezzan, via Germa. After Germa, wrote the historian Herodotus, lived people with no heads. We were going well into headless people land, on our way to the Touareg capital, Ghat, close to the Algerian border. Disappointingly, not on headless person was seen, though many, head-wrapped against the sun and the sand, were almost faceless.

Our days quickly settled into a pattern: we would be up around 7.30; breakfast; pack up camp; get Omar or Abu Bakr to give a master class in turban tying; move around 9. A long drive punctuated by some extraordinary sights followed. Then came lunch (a variation on a salad nicoise for the visitors, a shared, cooked meal for the locals), more sightseeing; around 6, a dash to find a campsite for the night before night fell.

An eclectic mix of Ancient Rome, Byzantium, and Ottoman influences

We went first to Germa, near Garama, the ancient capital of the Garamantian empire of the Fezzan. Germa has a dismal little museum which might have some of the most extraordinary treasures of the world within its walls. It’s impossible to know, given the general poorness of the captioning in Arabic or any other language. But Garama, a dusty ruin of a place, built in the first century AD, shows the waves of foreign influences – a Roman forum, a Byzantine church, an Islamic mosque and madrassa.

From here, the Romans maintained contact with client kings in Numidia, through to Mauretania. From this part of the Empire, the Romans imported grain, wine, oil, the fine horses for which the area was famed, and, from further south, wild beasts such as lion, giraffe, elephant and crocodile for the games.

We left dusty Garama, and pressed further towards the Jebel Akakus. Deep in the south-west of Libya, a great natural arch announces the entrance of the visitor to the Akakus Mountains. There, we found galleries of rock art paintings and carvings more than 12,000 years old, images which show the countryside as fertile savannah full of elephant, crocodile, game and domestic animals such as horses and cattle.

The most impressive of these galleries is on the other side of the Idehan Muzuk (the Muzuk sand sea). It’s across the Ocean of Stone, kilometre on kilometre of black rock which make the blasted landscape look like a preview of Hell but is worth the trip just to see the Wadi Methkandoush; on the southern side of Msak Settafet, it runs for 12 kilometres along the rock wall of the wadi.

The beauty of the natural landscape of this part of the Idehan Ubari (the Ubari Sand Sea) was equalled by the wonders to be found in it – the salt water lakes of the Ubari oases. The water here is prized by the Touareg, who see it as something like local magic water; our drivers filled their jerry cans with it to take home. Some of our group swam here, as well, emerging from the oasis encrusted with salt. But the principal attraction of our desert experience was at Ghadames (above), known as the pearl of the desert. Close to the Tunisian/Algerian/Libyan border, Ghadames hosts an annual, international tourist festival featuring Touareg a go go.

The host town, about 3000 years old and now a UNESCO World Heritage-listed site, is a fascinating mud brick oasis settlement. The largest and best preserved of its kind in Libya, Ghadames was once one of the busiest trading towns of the northern Sahara, with caravans organised by local merchants sent all over North Africa, from the Atlantic to the Red Sea.

Annually in October, Ghadames plays hosts to musicians from throughout the region in celebration of their indigenous music. They gather on a soccer field in the centre of the new town, with a mosque’s illuminated minaret looming over the scene. There, massed tall, veiled Touareg in traditional dress – black, full-skirted coats, over camel riding pants, tightly cinched in at the waist, and accessorised with swords and veiled head dresses in black and white – stole the show with both their musical skill and their gimlet-eyed, unknowable and terrifying beauty. Quite like the Sahara itself, really.

Is this trip safe? Not any more. Smart Traveller says do not travel.

When I was there, Libyan citizens were not permitted to own guns. Alcohol was banned. There appeared to be no crime to speak of. We left our gear in the 4x4s wherever we went, and nothing was ever touched. Our tourist policeman was armed, but when I asked if he were protecting us against his countrymen, or the Libyans from us, he laughed. Boy, how things have changed.

Here is some information which might be useful if Libya is ever stabilised again:

How are women treated? In my experience, with enormous respect and courtesy. I was followed once: In the Tripoli souk, a man ran after me to return five dinar I had dropped.

Do women have to wear head scarves? Visitors should dress modestly – but that is also a requirement for people trying to get into San Marco in Venice. In mosques, women cover their heads.

What about the bathrooms? There are very few public toilets in Libya and those that exist are often not as Westerners might desire. If you find good one, use it. You never know when you might see one again.

Showers? Hah! In the desert, there are wells every 70 kms or so. You will learn you can shower in the open air under a jerry can if you have to.

The essentials: A good quality, three-season, rectangular sleeping bag. You will need a torch, a Swiss Army knife, a towel (though a sarong can double for that, as well as work as a head covering.) I also found that in the middle of quite alien surroundings, a cake of Chanel No 5 soap was very calming. Don’t forget a packet of Wet Ones or sun-screen. As soon as you can, buy some fabric and get your driver to show you how to arrange it into a turban, either Arab or Touareg fashion.

Getting there: See of Sand Ruins Tours in Tunisia can help…. https://www.facebook.com/Sand.Ruins.Tours

It used to be simple to travel Libya: Fly to Rome with Cathay Pacific or Qantas/Emirates, and then make an Alitalia connection to Tripoli. These days, you cannot fly straight down to Tripoli from Rome. You have to stage through Tunis or another port. This can turn a two hour flight into a 17 hour horror story and in some cases two stop overs.

Images 2 and 3: Night and morning in camp in the Great Sand Sea

Image 4: The author with the local tour guide, Salah Amura

Image 5: The on ground team of drivers, cooks, local police officer, and fixers

Image 8: Ghadames, oasis and “the pearl of the desert”