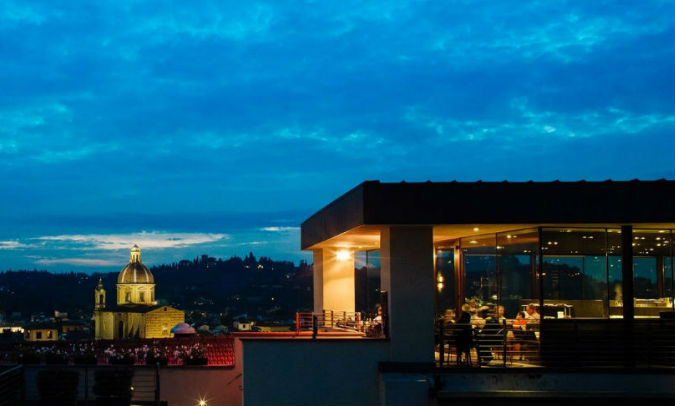 When 47 Plus was in Florence last year, the editors found the three best bars in the city. And here they were. But in Spring, we went back. And sadly have removed one from the list, and added two. First, who’s in: Sesto, on the sixth floor of the Westin Exclesior in Piazza Ognissanti. It boasts a great view over the city and the Arno, up to the Piazzale Michelangelo, and down way past the Carrara bridge.

As in all good bars, the service here is quiet, unobtrusive but attentive. The snacks are not bad either.

At sunset, Sesto comes into its own – glamorous and sleek, chic and fabulous. You will love it!

The out of towner

And then there is an out-of towner on the list… the Bar mediceo at Villa la Mass. It’s about six kilometres from the centre of the city (about  €15) but well worth the excursion. (Follow it up with an exquisite dinner in the Verrocchio restaurant, where Chef Simone now holds sway.)

Antonello, is the charming head of the bar, for whom nothing is too much trouble. He is also great with young people. 47 Plus had friends in for drinks one evening – in the hall, where the chairs are more comfy – and one of the guests was about to turn 13. He solemnly ordered a Virgin Mary, which Antonello equally gravely supplied. He is also the man to ask if you have a passion, as we do, for caper berries!

The cocktails are  bit of a surprise… there has been a growing collaboration between Villa la Massa and the profumerie Santa Maria Novella  – great syndery here between these two luxury companies.

So then, who’s out. It’s the rooftop bar at the Continentale.  The location is still great but the service is a nightmare. Example: The bar opens at 2.30pm on Sunday. We toddled off for lunch at the beautiful Hotel Lungarno and returned in time for a drink at 2.30. We were about fifth and sixth in the queue. “Bar will open in about 10 minutes,” said the cheerful receptionist.

So at around 2.45, we were allowed up, to discover others had been allowed in first. And then when we chose a spot, we were told it was for bigger groups. Within 10 minutes, that spot was occupied by the same number of people as were in our party. Then it took forever to be served. Sad. It’s a fantastic location but the staff was pitiful.