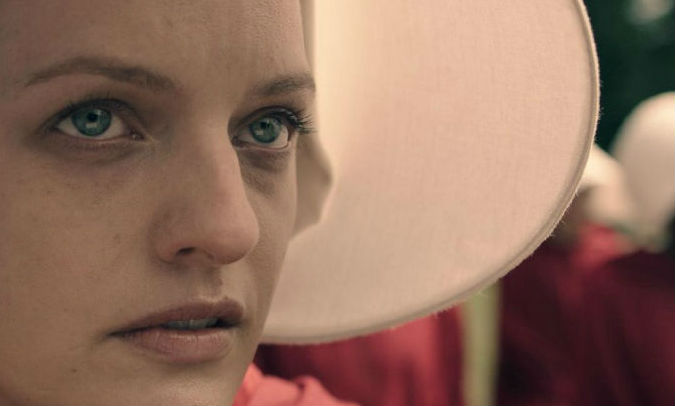 The Handmaid’s Tale: When watercooler TV took a turn for the dread

Helen Atwood’s 1985 vision of dystopia in the United States – The Handmaid’s Tale – sent chills through the blood. Now, more than 30 years later, this still-fresh tale is shocking a new generation. Our TV critic Anastasia Flint reports. I wasn’t going to watch it. Having read the book years ago, I just couldn’t go back to Gilead. On top of that, I have trouble watching Elizabeth Moss on screen. I think it’s the nose.

A bad cold, a freezing Sunday, and streaming on SBS on Demand got me there for the first episode. And it was game over.

The story, set in the aftermath of some unspecified war (civil, as if there is ever a “civil” war) sees a warped patriarchy in charge, infertility rife, and fertile women commodified. The men use Old Testament justifications to control behaviour, and it is horrifying.  (For details, have a look at this link.)

It is a huge hit around the world, nominated for 13 Emmy Awards this year including:

Acting noms went to the star, Moss (what would I know?), Ann Dowd, Samira Wiley (fresh out of Orange is the New Black thanks to that unfortunate shooting during the prison riot), and Alexis Bledel, who has really moved on from The Gilmour Girls.

Part of the charm – charm! – of The Handmaid’s Tale series of 10 episodes (and Hulu is making a second given the success of the first) is that it looks like almost nothing seen on TV before. Part fantasy, part horror, and all original, it uses lighting tropes from both those genres to reinforce the dread. Another is the fact that many of the actors are relatively unknown but who have solid CVs behind them.

It’s water cooler television,  and top shelf stuff at that.

Helen Razer didn’t care for it: YOU DIDN’T NEED TO BE A ‘CLAIRVOYANT’ LITERARY STAR TO HAVE SEEN TRUMP COMING