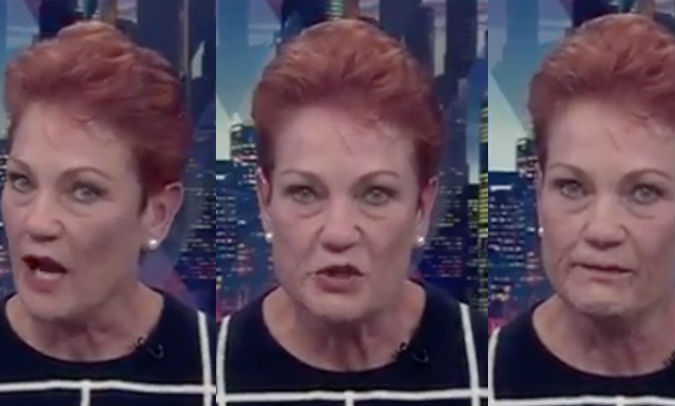 Senator Hanson has a turn for the worse

Last week, Pauline Hanson simply melted down on live television, shrieking and strident as she condemned colleague Senator Brian Burston for doing what so many other One Nation elected members had done before him – failing to toe the party line.

And the party line is Senator Hanson’s line. In mid-May, she was written into her party’s updated constitution as effective president for life.

That means that only after the resignation of Senator Hanson’s hand-picked successor will the party’s national executive be able to elect future presidents by majority vote.

The President for life

What fired up the President for life was Senator Burston’s refusal to follow her lead and backflip on the government’s company tax cuts.

In an extraordinary Sky interview, Senator Hanson, accused Burston – who was also sacked as party whip – of trying to defect to the Shooters party. And it was not the first time the NSW maverick Senator had tried to stab her in the back, she claimed.

“This hurts me, it hurts me deeply… it means so much to me what I’m trying to do,” she said. “But I’m going to keep going and I’m going to get good people in that parliament next to me.”

And there is the Senator’s problem in a nutshell. The people who will bow their heads to the President for life are either going to be ineffective “yes” men and women, or unreconstructed mavericks who tick all the boxes at the interview stage and then gradually reclaim their maverick natures. The cast of character who have marched out of One Nation is almost as big as the one which has marched in. Think David Oldfield, then later Rod Culleton and Fraser Anning.

“Make no sense of what she was saying”

Burston, who appeared later with Ben Fordham (who must have been gleeful at the carryon), described Hanson  as having her moods. “She’ll come back down to earth.”

He said they had earlier had a phone conversation. “She was very, very angry and raised her voice. I ended up hanging up on her because I could not make any sense of what she was saying.” (This is something the Australian electorate frequently feels when Senator Hanson enters a stream of consciousness on Sunrise.)

What’s at stake here is not only Hanson’s relationship with her parliamentary colleagues, but her role as power broker in the Senate. She currently controls four votes. If Senator Burston jumps shop, she will be left with three and her veto power evaporates. There is also the approaching Longman by-election.  The instability which has followed her attempt to roll out populist policies (no company tax concession for big business) could undermine One Nation’s support in the electorate.

All in all, it’s fraught for the dear Leader for life. And there is little time to get the ducks in a row before the party is tested again at the ballot box. She might very well have scored a sensational own goal with her very public turn.