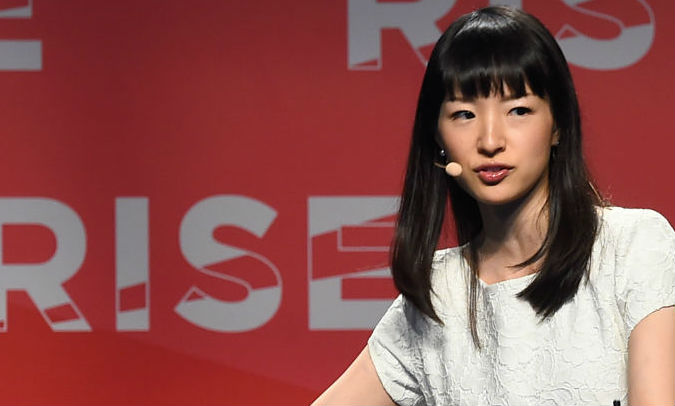 Lessons learned from the high priestess of declutter A first hand report from the trenches by someone one who picked up Marie Kondo’s book about decluttering and acted on the lessons she found within.

I’d heard about Marie Kondo, a Japanese organizing consultant, from friends who spoke evangelically about her methods and how they’d transformed their lives. In case you haven’t, here’s the gist: With her little turquoise book, The Life-Changing Magic of Tidying Up: The Japanese Art of Decluttering and Organizing, Kondo set off a decluttering craze across the globe. Kondo’s services command a waiting list a mile long in Japan, but for the rest of us, her book breaks down her radical, two-pronged approach to tidying. First, put your hands on everything you own, ask yourself if it sparks joy, and if it doesn’t, thank it for its service and get rid of it. Second, once only your most joy-giving belongings remain, put every item in a place where it’s visible, accessible, and easy to grab and then put back. Only then, Kondo says, will you have reached the nirvana of housekeeping, and never have to clean again.

All of this sounded wonderful. But I can barely keep up with the demands of daily life (laundry! groceries! deadlines!) But once I read Kondo’s book, I got totally sucked in. It turns out, tidying really may be the way to bliss. Here’s some what I learned.

I’d always tackled clutter by room—take on the office first, the bedroom next. Instead, Kondo’s first rule is to tidy by category—deal with every single one of your books at once, for example, otherwise they’ll continue to creep from room to room, and you’ll never rein in the clutter. She advises beginning with clothing, since it’s the least emotionally loaded of one’s things (books come next, old photographs are much later), so as soon as I found a free afternoon, that’s exactly what I did.

With my eyes now open, I realized my closets had hit rock bottom. Everything had succumbed to a mixed-up messiness. Kondo asks that you consider your clothing’s feelings: Are they happy being squashed in a corner shelf or crowded onto hangers? Are your hardworking socks really thrilled to be balled up? It had sounded out there when I read it, but suddenly my clothes looked totally miserable.

Lesson #3: Nostalgia Is Not Your Friend

As I started emptying the closets, I opened boxes filled with letters and old photographs. Serious mistake. Kondo knows what she’s talking about when she insists you put blinders on and focus only on the category of stuff at hand. Read one old letter, and suddenly you’re down a rabbit hole of nostalgia.

To be honest, I was probably procrastinating. In theory, I was sold on the idea of living exclusively with clothing that gives me joy, but I still had hang-ups: What will I be left with? Will I have anything to wear to work? Will I have to sacrifice beloved things, all for the sake of decluttering?

Then my 18-month-old son, Henry, wandered in, and there’s nothing he loves more than recluttering. The afternoon was basically lost. If you do this, don’t waste time like I did (and maybe book a babysitter for this project).

Find the story from One Kingslane here.

And here is a great how to guide on how to actually do it, from Yahoo! UK Style.  Print it out and mark off the categories as you go.