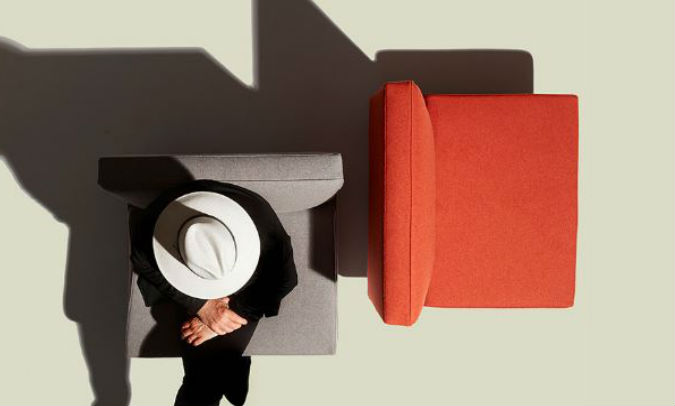 Robin Boyd was one of a family of creative geniuses – Arthur, David, Hermia, Martin, Meric… the list goes on. But Robin Boyd was Australia’s great modernist architect. And his aesthetic extended to the furniture he designed for his own home. As Stephen Todd reported in Furniture fit for an architect: Robin Boyd’s designs go out into the world for The Australian Financial Review: “Robin Boyd was one of last century’s finest architects. But he was also an incisive cultural critic, a tireless commentator on the foibles of our nascent nation. “In all the arts of living, in the shaping of all her artefacts, as in politics, Australia shuffles about vigorously in the middle of the road, picking up disconnected ideas wherever she finds them,” he wrote.

“Our ‘unwillingness to be committed on the level of ideas’ resulted in what he famously termed The Australian Ugliness – the title of his 1960 treatise on bourgeois addiction to ornamentation.

“In his own buildings, Boyd (1919-1971) refracted all the rigour of structures by Le Corbusier and Mies van der Rohe through a slightly funky, antipodean lens.

“Despite their intellectual rigour, there’s something joyous about Boyd’s houses. The volumes sweep and soar, living spaces are majestic. They are places for entertaining as much as for retreat. His home, on Walsh Street in Melbourne’s South Yarra, is a fine example of mid-century modernism; at once cerebral in its planning and emotional in its execution – especially in the way it sits within its surroundings…”

Faithful reproductions of the originals

Now, thanks to the Robin Boyd Foundation, his designs are now available to the public.

Boyd designed these pieces  himself: Two sofas, a dining table, two coffee tables, a sideboard and a daybed. Beautiful and functional, made from Australian hardwoods, each covered with Australian wool fabrics and tables topped with cork tiles.

Manufactured in Boyd’s home town of Melbourne, each piece is faithfully produced to the same specifications, materials and functional solutions of Robin Boyd’s originals. Each is an expression of the creativity and versatility of his work and is testament to his design principles of durability, quality, and clarity form.