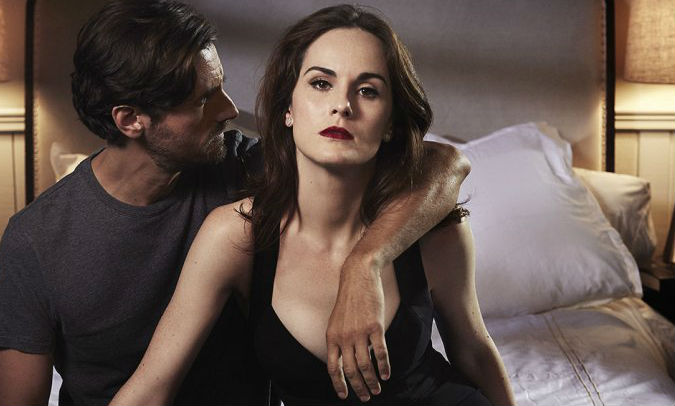 An almost permanent sneer frosted actor Michelle Dockery’s classic features, and the languor of her manner was a perfect front for Lady Mary’s roiling, secret self (the one who bedded a Turkish diplomat under Daddy’s roof and then sought help to remove his lifeless body in the middle of the night) which she preferred to hide from her family. When the series came to an end – Lady Mary happily married off and with a new title astonishingly inferior to that of her despised younger sister, Lady Edith – it was clear we would miss Lady Mary, the character created so deftly by Dockery (right with guns at a Downton shoot).

Surprise then to find Ms Dockery back in not one, but two dramas – Godless on Netflix (one series), and Good Behavior (two series so far) on Stan.

And they are some distance from Downtown Abbey both in terms of time and milieu. To say nothing of the accents. While Godless is a costume drama, an unfamiliar take on the Western, and Good Behavior is a contemporary  study in moral ambiguities, they provide bountiful opportunities for Dockery to show her acting chops. Let’s start with Godless and its ambition, which is considerable. Written and directed by Scott Frank (Get Shorty, Minority Report) for Netflix, and executive produced by Steven Soderbergh, its seven episodes are set during the days of the silver rush in New Mexico. This is a story in which the law battles the outlaws (the anti-hero is even called Goode and the white hat sheriff’s deputy is called Whitey), the mad and the bad exploit the innocent and the defenceless, a world in which societal norms are largely tossed on their heads.

This long arc drama was originally planned as a movie, but it is a mercy that Scott was convinced to see the virtue in the longer form. Characters are fully developed, set ups never rushed, the evil done given time to deliver its terrible impact.

It opens with a long scene, a familiar Western trope: A  lawman – Marshal John Cook (Sam Waterston) – rides into town (a town called Creede!) – at the head of his posse. In a swirling dirt storm, he lowers his bandana and a circle of Hell is revealed. The town has been destroyed, its citizens murdered. A young boy hangs, lynched and limp, in the main street.

An outlaw gang, led by Frank Griffin, played by Jeff Daniels, had been through here. Griffin was searching for the adopted son – Roy Goode – who had betrayed him and who was then sheltered by the people of Creede. “Roy Goode betrayed me, and I will kill any man, woman, or child who harbors him,” Frank tells a spineless newspaper editor in episode two. “The good people of Creede let him walk their streets. And now they don’t have any streets. Or people.”

And so it happens that Roy Goode arrives in the night at the home of Dockery’s character Alice Fletcher, twice-widowed, now dirt farming to support her son Truckee, and his Native American grandmother, Iyovi (played by Tantoo Cardinal from Longmire and Frontier). Alice, suspicious of Roy and his intentions, drops him with a bullet in his neck, then puts him into the barn to recover.

Alice is reserved, suspicious, quiet, an outlier who has experienced first hand how violence can be visited on anyone at any moment. (She also has an accent which slips about a bit. ) Alice helps Roy, teaches him to read, watches his relationship with her son flower.

There’s the set up, and there is a lot at stake. The scenario is further complicated by the fact that the people of LaBelle, the nearest town, are pretty well defenceless. The men of the town, silver miners mostly, were all lost during an explosion at the mine, and their women have to manage the town and its silver reserves in the face of corporate raiders, pointless violence, and now Frank Griffin and his crazed, apocalyptic mood swings.

Even the sheriff is not up to snuff – he is going blind. So really, there are not that many people around LaBelle who can shoot straight.

Fortunately, the sheriff has a sister, Mary Agnes (Merritt Wever from Nurse Jackie) who, freed from her marriage, develops a relationship with one of the saloon girls, who in turn – in the absence of male clients – turns into the school teacher. As mayor in place of her husband, she can organise, strategise, and she can shoot.

This film is beautifully made, gloriously and lovingly shot, and the violence serves the story. There is a sort of happy ending, but the literal battle of the sexes in the streets of LaBelle makes you pay for it.

What Godless Says About America, The Atlantic

Netflix’s wonderfully wicked western fires on all cylinders,  The Guardian

Netflix’s ‘Godless,’ a Western With a Little Bit of Everything,  The New York Times In this fresh take on The Odd Couple, Michelle Dockery plays Letty, a tweaker, grifter, thief, who has just been let out of prison on the grounds of – you guessed it – good behaviour. Her arrival at a platform to nowhere gradually comes into focus.

She’s pretty well a train-wreck, Letty, a member of the underclass who simply has no chance. She has a mixed-race son, and a mother, Estelle, who seems a shocking piece of work. Letty’s goal is to recover her son Jacob, but that restraining order her mother got when she acquired custody of her grandson is in the way.

Letty was given a waitressing job on her release, but after a narrow escape from rape at the hands of one of her fellow grifters, she takes up where she left off before prison. Letty’s expertise – in boosting money and jewels from hotel rooms – gets another run.

But one of the rooms she is robbing is suddenly revisited by its occupant and his guest. Letty locks herself in the wardrobe and accidentally overhears a murder plot hatched. What should she do? What can she do? Her parole officer, Christian (Terry Kinney) seems to push her in the way of the right thing – unknown territory for Letty.

Letty seduces the hit man – who is as hot as – and discovers the details of the plan. She goes to the house, explains to the mark that she is about to be offed, grabs a shot gun, and holds the assassin – Javier – while the intended victim calls the police.  She gives the intended victim the shottie, then legs it.

Some little time later, the assassin finds her again, having completed his task.

Letty: How did you get out of that house?
Javier: Because I am not a fucked up junkie.

Letty: How did you find me?
Javier: Because you ARE a fucked up junkie.

Reluctantly, Letty is forced to work with Javier on his next job. He is meticulous, cool, ordered; she is none of those things, and still he takes her on the road. The forces of the law are gathering behind them.

The tension surrounding the adventures of Letty and Javier is neatly balanced by the slow exposition of how these two got to where they found each other. It is a odd love story, but extremely compelling. Something for the holidays?