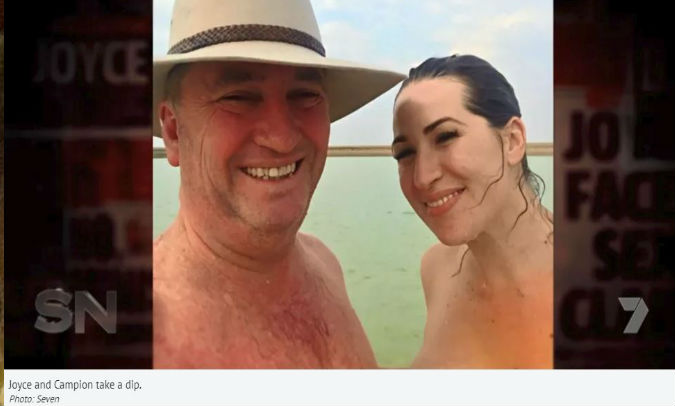 Joyce and Campion – the questions Seven failed to ask What to make of the Seven Network interview with former Deputy PM, Barnaby Joyce, and his former media adviser, Vikki Campion, last night?

The first impression is that we are all human, and some more human than others. And some of us are smarter than to sell ourselves into the arena of public judgement. Not Barnaby and not Vikki though.

They sat down with Alex Cullen, a reporter for Sunday Night, who had all the determination and spine of the skin off a custard. Here was a journalist saying this was old-fashioned journalism, who simply did not ask the questions which legitimately concerned – and continue to concern – the public.

Those questions which went to nepotism, for instance, and the potential misuse of public funds to help facilitate a relationship between a minister and a staffer. And the use of a townhouse, loaned by a friend, rent-free?  Joyce moved out of the Armidale property in February, but questions still remain about the largesse of its owner. Questions too about the ethics of a sitting Member doing a paid tell-some of it interview like this. They are the questions Cullen did not ask. Nor did he ask Barnaby Joyce why, when he knew that Vikki Campion’s pregnancy meant he would lose his job, did he continue to hang on to office for week after excruciating week, damaging the government in the meantime.

And now, when he declared on camera that he doesn’t “give a shit about politics” is he still a politician, drawing his salary and expenses, and not actually carrying out his duties in New England.

This is what he told The Australian in February:  “Personal issues are personal issues and I’ve always tried to keep my personal life separate from my public life and desperately wanted that. I don’t think it affects my job.

“I continue to work incredibly hard. Everybody knows that; they know the delivery that we’ve had while I’ve been the local member and I want to continue on with that delivery.”

Hardly any wonder Australians are disillusioned with politics and our politicians when questions, vital to the national interest and fundamental to our system of government, are simply not asked.

The Seven Network was apparently expecting 1.5 million viewers for their $150,000 fee. The Sydney Morning Herald reported the relative ratings failure of the exercise: In the end, curiosity trumped disgust, delivering a national average of more than 1 million viewers to Channel Seven’s Sunday Night.

The program – devoted entirely to an exclusive paid interview with Barnaby Joyce and Vikki Campion – defied social media expectations of a ratings rout.

The result can be described as solid – but not exceptional.

And here is another observation drawn from Sunday Night about Barnaby Joyce MHR – you wouldn’t want to rely on him for emotional support. Just looking at the body language between Joyce and Vikki Campion, there seemed an ocean of space which Barnaby occasionally reached across to soothe Vikki. The first time, he slapped her on the shoulder to encourage her. It was a wonder he didn’t dislocate it.

Vikki Campion can look forward to more of this, as she and the self-described five times failure try to navigate the public interest in the questions which were not asked and answered by Alex Cullen.

Who also deserves an F for his part in this terribly, terribly sad trawl through things which have nothing to do with us, while side-stepping all the questions which do.