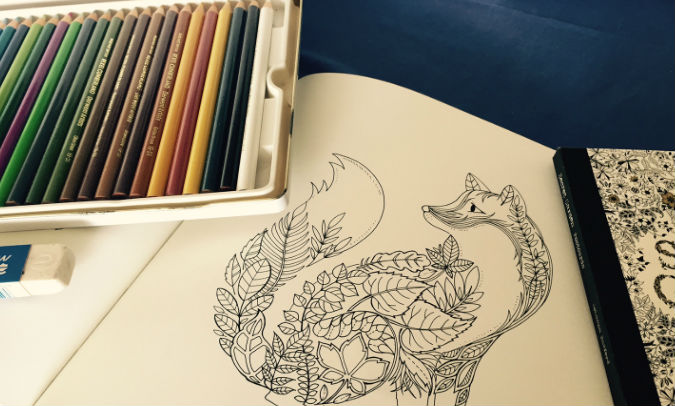 Hand me the pencils, I want to colour my world

Adults are buying coloring books (for themselves)… Adrienne Raphel looked at this new passion for pencils and more of the habits of childhood for The New Yorker.

Basford suggested instead that she draw one for adults. For years, she told her publishers, her clients had loved to color in her black-and-white patterns.

The publishers were convinced, and ultimately ordered an initial print run for Secret Garden: An Inky Treasure Hunt and Coloring Book of thirteen thousand copies.

Since the book’s release, in 2013, it has sold about two million copies worldwide; for a time earlier this year, Secret Garden and a follow-up, Enchanted Forest: An Inky Quest and Coloring Book, were the two best-selling books on Amazon.

“If someone saw you coloring in one of my books, they wouldn’t give you a weird look, because it’s the same kind of artwork you would see on a champagne bottle,” Basford told me. “The artwork itself is sophisticated––not like a car or a bunny with a bow in its hair.”

Coloring books for adults have been around for decades, but Basford’s success—combined with that of the French publisher Hachette Pratique’s Art-thérapie: 100 coloriages anti-stress (2012), which has sold more than three and a half million copies worldwide, and Dover Publishing’s Creative Haven line for “experienced colorists,” which launched in 2012 and sold four hundred thousand copies last May (2015) alone—has helped to create a massive new industry category.

“We’ve never seen a phenomenon like it in our thirty years of publishing. We are on our fifteenth reprint of some of our titles. Just can’t keep them in print fast enough,” Lesley O’Mara, the managing director of British publishers Michael O’Mara Books, wrote to me about their own adult-coloring-books catalogue.

The trend has been fuelled to some degree by social media—colorists post their elaborate creations on Facebook and Pinterest, garnering fans and offering pro tips on things like Prismacolor versus gel pens, or how to make that tricky owl in the corner pop—and by marketing that associates them with such therapeutic ends as anxiety- and stress-reduction.

But it is also part of a larger and more pervasive fashion among adults for childhood objects and experiences. This “Peter Pan market” has roots in publishing, beyond coloring books (the growth in sales of children’s and young-adult books to much older readers has been well documented), but it is far from confined to that arena…

To read the full story, click on this link.