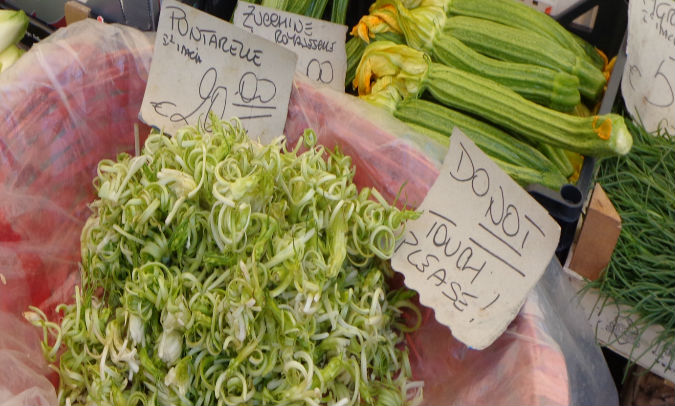 Give chicory an Italian name and ecco – Puntarelle alla romana!

For foodies, Rome in Spring means a couple of things… beans on May Day for a start. And the best chicory salads in the world. Kathleen Moore reports. I have a favourite restaurant in Rome, one which is perilously close to the Pantheon where gormless tourists are terrorised by young men trying to press gang them into something which is more a trap that a tratt.

But one day, years ago, I came across Maccheroni on the Piazza della Coppelle. No touts, no trouble, and a table outside on the street. Actually, to be fair, the tables are virtually in the street.

This is a restaurant frequented at lunch time by politicians,  who nip over from the Palazzo Madama, and at night by locals who lived around these parts in Campo di Marzio. (In Caesar’s time, it was Campus Martius, the Field of Mars; now it is one of the most desirable localities in the Eternal City.)

And in a city where outrageously priced restaurants abound, and Roman waiters have a rep for “tood” rather than food delivery, it can sometime be a coin toss as to whether or not you will actually get a half=decent feed.

And that is why Maccheroni is such a stand out. It’s honest, the wine comes in red or white, in carafes big or small.

Now, every year when I am in Rome, I go there for dinner. And because I am there in chicory season, I always start with puntarelle alla romana.

This unusual salad is hyper-Roman speciality. It is truly delicious: Crisp bitter curls of tender young chicory shoots tossed with a dressing of anchovies, garlic, vinegar and olive oil. You can find the chicory (puntarelle) in the markets, but making the shoots crisp up is a bit of a chore.

If you must, crisp the chicory yourself. This method is by Rachel Roddy from Rachel Eats: Fill a large bowl with cold water and ice cubes and set it aside. Pull the hollow bulbs from the head of puntarelle and stip away the other leaves, then, using a sharp knife cut each bulb lenghways into thin slices and drop each slice in the iced water. Leave the slices soaking for about an hour during which time they curl up and become beautifully crisp.