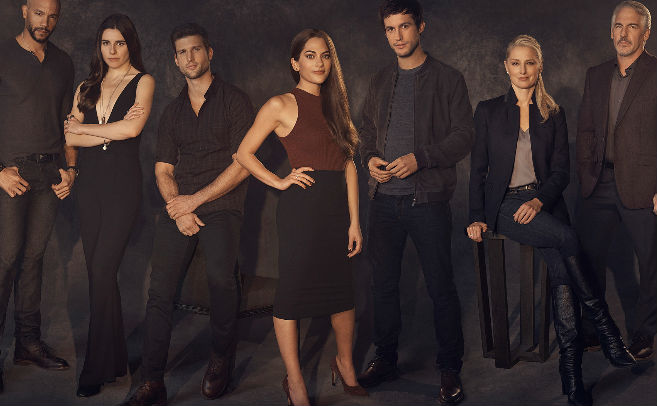 Time to get your head in the game?

Imposters almost immediately establishes two parallel narratives plagued by two parallel problems (three, if you include that all the characters just seem to be on opposite sides of Vancouver from each other), laments The Hollywood Reporter. Our TV critic Caroline Ford gives the Bravo show the once over. If you loved Good Behaviour – and I did, a lot, thanks to the sexy pair in the lead – you might enjoy this newest addition to the catalogue of films and tv shows about con artists and grifters in the style of Paper Moon.

Imposters begins slowly, very slowly. A newly wed couple (Ezra and Ava, played by Rob Heaps and Inbar Lavi), deep in the first month of marriage, celebrating  every wonderful and miracluous new moment of being together.

This blissful reverie is disrupted when Ezra gets home one night and discovers his beautiful, Belgian, brunette wife missing. As well as the money from the safe. But it is not a kidnapping and robbery – there is a link on the fridge which explains what has happened.  took him for a ride, and everything – everything – is gone. Ezra cannot call the police because of incriminating photographs which would destroy his parents’ marriage so he decides to top himself. He looks up noose making on line, creates one out of an extension cord, puts it around his neck and steps off a chair.

He falls to the ground, alive and alone. This is the bit which mad some critics call it noir. Or noir-ish.

Send in the clown

As he sits on the sofa considering the absolute desert of his life, there is a knock at the door. Enter an FBI agent, flashing a badge. He declares himself from the Federal Burro of Investigation. So, some one sent in the clown. Now we are in the area which allowed one critic to call this a comedy. Right.

Ezra and Richie discover they were both married to Ava – but in Richie’s case, she was blonde and she was Alice. Soon this unlikely duo team up to try to catch her – even though Ava/Alice told them they never would. They track her down to the apartment of AVA/Alice – known and CC – and another “spouse” – Jules. This is the lesbian marriage. Same deal though – Jules, who is just finishing her therapy trying to get over the betrayal, becomes one of the band.  Together, these three go on the road, perfecting their con artist skills to get to Pottsville, Pennsylvania, and the home of her parents. Turns out she is Maddie Johnson, and she is in Seattle.

That’s where the next marriage con is being staged – but this time, she is after the bullying  head of a local bank and the game is on foot, thanks to her two associates, Max and Sally. Things get a bit messy, though, when Maddie meets Patrick, a handsome, tall, rich guy with a fantastic house and begins to fall in love with him.

The marriage and the banker turn out to be a bit of a bust when Maddie goes to visit him after hours to discover him dead and her accomplice Sally covered in blood and clutching a hold-all of cash which belongs to a mysterious figure called The Doctor.

Hey ho, the doctor, the master of the game but unseen for the most part, immediately shifts the target to Patrick. Initially, Maddie refuses the new target, but she is encouraged by the appearance of Lenny Cohen, the doctor’s muscle. Played with icy glamour by Uma Thurman, Lenny takes out Sally and gets the game back on track.

But it turns out that Patrick is not what he appears to be, either, when Richie follows him and stumbles into and FBI building. He’s not real, she’s not real, the three dumped ex-spouses are turning into minor crims, and the whole thing is satisfyingly twisted.

To flush out the Doctor – the real target of the FBI investigation – another marriage has to be staged. And so a game within the game begins.

It’s sometimes hard to see what could be a satisfactory outcome for the three  exes – at some level, they want their money back and the girl. She’s a little bit heart-broken herself, because she was genuinely falling in love with Patrick. It’s sort of fun to watch them try to nut it all out.

Variety liked it.  And so did enough fans – it’s back for Season 2 in April.

Image 1: Another wedding, another dress.