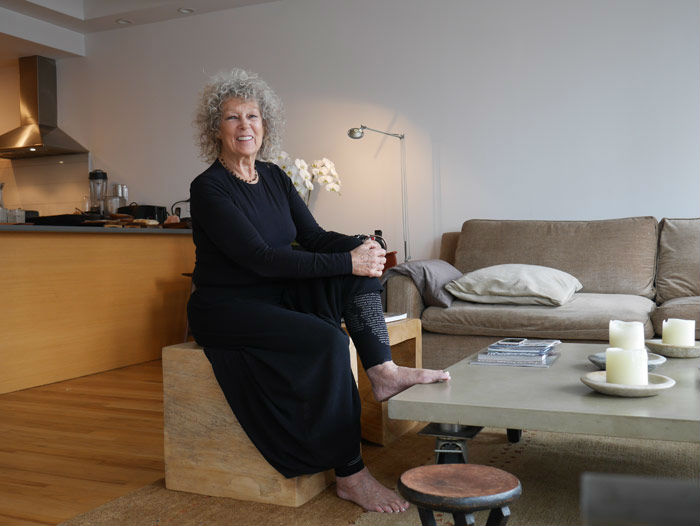 For New York Social Diary, Sian Ballen and Lesley Hauge, with photographer Jeff Hirsch went to visit the New York-based Irish designer who needs only one name to distinguish her – Clodagh. With a background straight out of an Edna O’Brien novel, “downwardly mobile aristocrats” as she describes her family, growing up in Oscar Wilde’s summer home and having a near-death experience after breaking her back when she was teenager, how could Clodagh, the Irish-born, New York-resident, fail to be fascinating?

She started out as a fashion designer “a thousand, maybe two thousand years ago” and is now known throughout the world as a designer of tranquil spaces, although that is not quite how she sees herself. She says she designs for the appropriate space be it a nightclub or a spa—for her, it is “a question of putting your ego out of the way.”

In my life, you mean? Well, we moved our studio because the building was sold to Equinox, so we had to get out very sharp and fast. We found this very beautiful studio on 23rd and Park with three massive skylights. We’re still in construction because we’re putting in a full kitchen so that we can give cooking and nutrition classes. You know that nutrition has always been part of our thing.

How did that come about, the nutrition being part of your thing? Were you doing that the last time? I don’t remember.

My life’s like an accordion … it does this and it does that. Well we had always had that in the old studio too … we had two raw cooks … we weren’t allowed to cook in the old place but we were allowed to do prep and raw food.

Who was that for—the staff, the clients?

It was kind of for everybody. And we had a class. In this new studio we’re going to have a proper cooking class. We’ve been advocates of wellness in the workplace since I was a fashion designer in Ireland a thousand years ago, maybe two thousand years ago. The whole place is very carefully monitored—all non-toxic cleaning agents, and now we’re putting in a massage program so that every member of staff gets a massage a month.

How many employees do you have?

Twenty-five—it’s very big on payday but not enough at all when you’re trying to rush out a project. And we have a lot of projects on our boards right now.

What types of projects are you doing? We just opened a very big wonderful hotel called EAST for the Swire Group in Miami. It’s like a business-glamorous resort hotel. And we did a hotel for Six Senses in the Douro valley. We’re going back there next week to do the villas.

What’s the ratio of spa hotels to the residential work like the rental buildings you’ve done, would you say?

The last time we interviewed you, the rental buildings with all these amenities hadn’t quite caught on—what do you think of them? There’s a kind of “amenities war” going on with developers, which I think is fantastic because it means people living in the building can have more fun.

Image 2: Light fills the living room space through a wall of floor-to-ceiling windows.