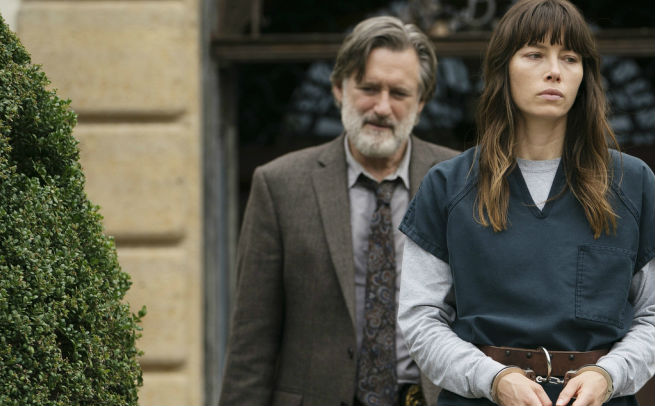 What to binge on this week: The Sinner, Line of Duty

Two very different but compelling dramas head the binge list, and there is one series which should perhaps be avoided. Our TV critic settled in on the couch to find the best for you. Like Mindhunter? Well, here is something which mines the same dark vein which once you are hooked you will not be able to look away from… The Sinner.

It starts a little slowly. A bucolic country town, a sleepy air-con business run by the family. Cora, a reserved young mother played by Jessica Biel, is so repressed that she appears to sleep walking. She sleep walks to the beach with her husband Mason (Christopher Abbott, who looks unnervingly like Kit Harrington) and their toddler son Lane… and there all Hell breaks loose.

Obviously triggered by something – a repressed memory, sun stroke, she is irritated by loud musuic – Cora loses it completely and kills – with a pear knife – a young doctor on the sand. So we know who dunnit.

But the police detective, Harry Ambrose, played with a lugubrious and damaged charm by Bill Pullman, wants to know why she dunnit. Cora herself just wants the whole thing resolved and determines to plead guilty. Pressed, she comes up with an explanation why.

And then all her lies unravel as it becomes obvious she would rather do anything – including 20 years in prison – than go back into the foreign land of her past. There is the frightful, religion-riddled childhood. The bad-boy, drug dealing boyfriend. The members only club which takes us into a sort of Eyes Wide Shut possibility.

It takes Detective Ambrose eight episodes to get to the answers. And for the first seven, the scripts brilliant, and the performances are transfixing.

Was Jessica Biel ever this good in anything before. Don’t think so. And as her little, fatally ill sister Phoebe, Nadia Alexander just about makes off with the show in the last two episodes.

It is full of twists, and unexpected reversals, which are extremely satisfying for the viewer. But the final episode is full of plot holes – the real villains (who have been there all along but extremely background) are exposed, and their discovery turns on a very weak connection. And then there is why Cora’s estranged parents never reported Phoebe as a missing person.

So 7/8ths great, and 1/8th not so good. Let’s hope they get this worked out and bring Pullman back in another series. We haven’t seen enough of the wounder Ambrose yet.

Three series of this unusual cop procedural are now available on netflix, and the good news is that Series 4 is underway and series 5 is confirmed. The program itself has proved such a hit in the UK that the BBC has moved it from BBC Two to the main game, the BBC itself.

The series are set in the anti-corruption unit, AC-12 (which makes you wonder exacly how many there are and how widespread police corruption is in the UK).

The whole thing kicks off when, after a shooting during a counter-terrorist operation, Dt Steve Arnott (Martin Compston) is transferred to the unit led by Superintendent Hastings (Adrian Dunbar).

Alongside DC Kate Fleming (Vicky McClure) they are assigned to lead an investigation into the alleged corruption by a popular officer, Detective Chief Inspector Tony Gates.

While Gates  manipulates his unit’s figures, DS Arnott questions whether Gates is being made a scapegoat for a culture of institutionalised spin, or is guilty of darker corruption.

The second and third series play a longer game, and brings in another star, Keeley Hawes (Louisa in The Durrells) to amp up the firepower as DI Lindsay Denton. She is the centre of the plot about an ambush, the death of a number of her colleagues, missing children, a potential paedophile ring, bribery. You name it, it’s all here.

Initial inquiries leave Arnott and Fleming back and forwards about her guilt – is she a hero, is she a villain – but finds Denton convicted and jailed. There, she has a difficult time to say the least.

On the outside,  Series 3 begins with  Sergeant Danny Waldron  (Daniel Mays, who played Ronnie Biggs of The Great Train Robbbery in Mrs Biggs) shooting an unarmed suspect, and forcing his team to back up his story.

The shooting is connected to the earlier police ambush, but how… and in their midst is a DI who will stop at literally nothing to confound their inquiries.

Series 3 ends with a tightly scripted, 90 minute finale which proves again just how good the Brits are at psychologically  driven crime drama. Not to be missed. The same cannot be said about Greenleaf. Here are some good things about it: It is set in a milieu not really seen in a TV drama before… a southern mega church in Memphis. The house of the pastor (Keith David) is huge. There is a large a dysfunctional family to populate the plot lines.

Oops, it is  beginning to sound a little like Falcon’s Crest without the perms and shoulder pads.

And that is exactly what it is. Throw in a dead daughter (Faith, leaving Charity {Joy Winans}  and Grace {Merle Dandridge}, the star of the show in every way behind), and abusive uncle (Gregory Alan Williams), a Queen Bee matriarch (Lynn Whitfield) who is more of a wasp, a couple of kids of the manse trying to rebel, a gay son-in-law (Tye White)…. It’s exhausting.

Produced by Oprah’s own OWN (and starring her as Mavis sister of the matriarch and the child abuser), it crammed to the gods with cliches and stock villains and actors who overact to the hilt.  Music in the church is good, though.

When the prodigal child pastor plunged a broken bottle into the neck of her abusive uncle, that was enough for me. You have been warned.

Image 4 – The family Greenleaf from Netflix